Those of us of a certain age (nope, even older than that) can remember rushing home from school in the afternoons to watch The Rocky and Bullwinkle Show, starring an intrepid flying squirrel and his moose sidekick. It had a regular feature called Peabody's Improbable History. Peabody, the genius dog, had invented the Wayback Machine, and he and his boy, Sherman, would dial in a year and travel back in time, helping to unscramble history that had somehow gone awry. Today we will borrow the Wayback Machine to visit 1939 and the release of Raymond Chandler's first Philip Marlowe novel.

Raymond Thornton Chandler, widely considered one of the most influential writers of twentieth-century noir, was a bit of an accidental author. When he lost his job as an oil company executive in 1932, during the Great Depression, he started writing short stories for The Black Mask pulp magazine to support his family. In 1939, he cannibalized elements of several of his short stories and reworked them into his first full-length novel, The Big Sleep.

The setup, briefly, is this: Dying millionaire, General Sternwood, father of two beautiful out-of-control daughters Vivian and Carmen, calls in PI Marlowe to deal with a blackmailer. It is not the first time he has been forced to pay blackmail on behalf of Carmen. Previously a man named Joe Brody had "sold" pornographic pictures of the luscious 20-year-old to her father. That time, Vivian's husband, Sean Regan, had handled the transaction. But Sean has inexplicably vanished, so the General must grudgingly turn to an outsider for help.

I have seen and enjoyed the classic movie version, starring Humphrey Bogart and Lauren Bacall, several times, but had never read the book. It is an entirely pleasurable experience. A lot of the dialog and descriptions that fly by too fast in the movie are wickedly funny and well worth lingering over in the book.

As Marlowe is leaving the mansion, the butler stops him to say that the older daughter, Vivian, wants to see him. He finds her in a huge suite, reclining on a chaise and drinking. She doesn't offer him a drink––or even a chair––before trying to pump him about why her father hired him.

"I don't see what there is to be cagey about," she snapped. "And I don't like your manners."

"I'm not crazy about yours," I said. "I didn't ask to see you. You sent for me. I don't mind your ritzing me or drinking your lunch out of a Scotch bottle. I don't mind your showing me your legs. They're very swell legs and it's a pleasure to make their acquaintance. I don't mind if you don't like my manners. They're pretty bad. I grieve over them during the long winter evenings. But don't waste your time trying to cross-examine me."

Then, as now, there were decency and marketing restrictions in Hollywood that required changes to Chandler's story and characters. The effect here was to make the movie even more confusing and ambiguous than the book. In one case, even the murderer was changed! While the rewrite hung together well enough, it weakened the story considerably.

One character considerably toned down in the movie was the disturbed and disturbing sex kitten, Carmen, played by the young fresh-faced Martha Vickers. I had to disagree with Marlowe in his assessment at one point: "She was a dope. To me, that's all she would ever be, a dope." He would learn better later. Chandler's Carmen is one of the more memorable and genuinely creepy fictional characters I have encountered. 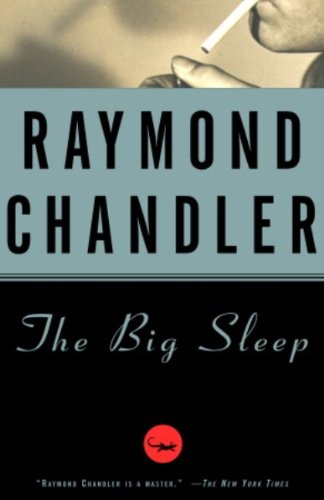 After the success of this first novel, Chandler never went back into industry. He would go on to write seven more Marlowe novels, the last completed by author Robert Parker long after his death. Most have stood the test of time quite well, and several were made into movies––The Big Sleep twice.

Writers for the 1946 screenplay of The Big Sleep included Nobel and Pulitzer Prize winner William Faulkner, and Leigh Brackett, a science fiction writer whose haunting and elegiac Skaith trilogy, about biologically modified races on a planet under a dying sun, is a standout in the genre. The 1946 movie is very good––a classic, in fact. But if you haven't yet read the book, you're missing out on a whole new dimension of Raymond Chandler and his tough-talking, chivalrous Philip Marlowe. This is one of those very rare instances where the book and the movie enhance and enrich each other.
Posted by Periphera at 4:00 AM