Review of Ben Macintyre's A Spy Among Friends 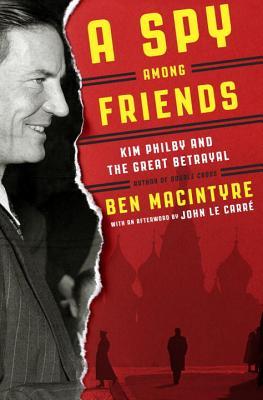 A Spy Among Friends: Kim Philby and the Great Betrayal by Ben Macintyre

Around the time World War II began, two young men joined one of England's most exclusive clubs, the intelligence service now known as MI6. The two had similar backgrounds: tony prep schools and Cambridge, where they became friends, and forebears who had served the British Empire. In other words, both were in the country's ruling elite and well plugged into the old boys' network. They were both admitted to the British intelligence service with little more than a "he's one of us" type of introduction.

That's where the similarity ends. Nicholas Elliott was everything that his background would suggest: conservative, patriotic and a firm believer that he and his class were born to rule. Kim Philby was only pretending to be the same. In reality, he was a Marxist, had been an agent of the USSR since 1934, and for over 30 years ruthlessly betrayed his country, his friends, family and colleagues, and sent hundreds, or even thousands, to certain death by betraying them to Soviet intelligence.

In a presentation at a bookstore upon this book's publication in the UK, Macintyre said this is "a story of male friendship and Englishness." The "Englishness" part of the story is tightly linked to the friendship part. Britain's MI6, formerly the Secret Intelligence Service, is the UK's foreign intelligence service. (For US readers, MI6 is the rough equivalent of the CIA, while MI5 is like the FBI.) When Elliott and Philby joined, MI6 was a very upper-crust place, filled with Eton/Cambridge men, from families that had been running the show in the British Empire for generations.

Elliott wasn't even a particularly good student, but he was from the right sort of family, so he had his ticket stamped to Eton and Cambridge. When he graduated from Cambridge, his third-class degree was no bar to him. He had only to express an interest in becoming a spy to an old family friend and he was in. Kim Philby's credentials were better, his degree was a 2:1, but he was also hired with just an "I know his people" from the right sort and, apparently, no checking into his background. A background, by the way, that included working for the underground Comintern in Vienna in the tumultuous uprising of 1933 and marrying another one of its activists.

Macintyre takes us into the heyday of espionage, and it's a wild ride. It's mind-boggling how many familiar names there are, from Peter Ustinov's father, to even Pope John XXIII, when he was Monsignor Roncalli. Macintyre gives the reader an evocative depiction of the atmosphere of spydom, from the intensely serious to the downright silly. For an example of the latter, I had to laugh out loud at the description of that hotbed of spies, Istanbul, during World War II, when a chief of station of any one of the combatant countries' agencies would enter a certain nightclub, the bandleader would swiftly lead the orchestra in a rousing version of "Boo Boo Baby, I'm a Spy." (Macintyre sets down all the lyrics, which are delightful, and I'm just disappointed that I haven't been able to find an online recording, other than some modern––and dreadful––hip-hop version.)

But just when I might be shaking my head or laughing at some absurdity Macintyre describes, he would drench me with a cold bucket of reality, describing how Philby eagerly turned over information about anti-communists, knowing that they would be mercilessly killed by the Soviets. In some cases, his reasons appeared to be ideological, but in others it was done to avoid his being exposed. In his later writings, it's clear Philby never felt any qualms about the blood on his hands.

Adding to the chill reality is the fact that Philby got away with it for so long and was climbing the ladder within MI6, on his way to possibly even becoming chief of service. It doesn't seem to have occurred to anybody in MI6 to match up all those cases where the Soviets seemed to know what the British were up to with the small handful of people who could have given away the game to them. Was it sheer stupidity? Both Philby, in his reports, and the historian Hugh Trevor-Roper rated many of the MI6 higher-ups as lacking in brain power. But Macintyre makes the case that Philby was the right sort, and that this made his betrayal quite literally unthinkable to the posh clubmen in MI6. It's a shame Philby's victims weren't the right sort, or they might have been served better.

Retelling the well-known Philby story within the framework of his friendships and the British gentlemen's club mentality of MI6 reanimates the familiar tale of Philby's treason. This is an espionage book, but it is not about spycraft. It is a study of personalities and a society. Macintyre's focus is on how Philby was able to make strong––and maybe even sincere in his mind––friendships, such as the ones with Elliott and James J. Angleton, who later become head of the American CIA, assiduously pump his friends for information, promptly turn over all of that intelligence to the Soviets, and get away with it long after he should have been exposed.

While the betrayal-of-friendship aspect of Philby's story is interesting, it is the "Englishness" part that is most revealing––"Englishness" actually meaning the world of the English upper class. What Macintyre exposes is a peculiar kind of tribal sociopathy, in which the clubmen of MI6 simply couldn't see that one of their own might not fall into line with their worldview. Worse yet, they didn't see anyone outside their class as quite worthy of their consideration. For example, when they trained Albanian guerrillas to slip back into the country, rally locals and overthrow the communist dictator, Enver Hoxha, the MI6 handlers dismissively called the Albanians the "Pixies." And when Philby's perfidy ensured that the guerrillas were wiped out almost immediately, the MI6 functionaries rued the failure of the mission, but had no depth of feeling for the loss of all those men.

The upper-class types within MI6 failed to see the betrayer in their midst and also failed to understand that the exclusionary nature of their system played a part in creating traitors. Just one example is George Black, an MI6 agent who was not part of the tribe, hated the British class system and became a Soviet agent after having been in a North Korean prison camp in the 1950s. After he was exposed and put on trial, he was sentenced in 1961 to 42 years in prison.

And yet, when MI6 finally saw the light with Philby, just a couple of years after Blake's sentencing, putting Philby on trial was apparently unthinkable. He was immediately offered complete immunity if he would reveal all, and Macintyre makes a good case that he was allowed to do a "fade," to slip away to Russia, after he was interrogated. Was it just because MI6 couldn't stand another round of bad publicity? That must have had something to do with it, but I was struck by the author John le Carré's talk with Nicholas Elliott some years later. When le Carré asked Elliott if MI6 had considered having Philby liquidated, Elliott instantly reproved him, saying: "My dear boy. One of us." At that point, I lost whatever sympathy I felt for Elliott and his smug, hard-drinking, clubby tribe.

Earlier this year, I was riveted by Robert Harris's An Officer and a Spy, which also described elements of social discrimination within an intelligence service, in this case the French service during the Dreyfus Affair. I thought that likely to be the most fascinating espionage title I would read in 2014, but A Spy Among Friends just edges it out. Even if you've read every book about Philby there is, I think you'll find food for thought in Macintyre's latest.

Note: Versions of this review may appear on Amazon, Goodreads, BookLikes and other reviewing sites under my usernames there.
Posted by Sister Mary Murderous at 4:00 AM