You May Remember Me

Yesterday, I said I'd tell you about Celeste Ng's Everything I Never Told You on Tuesday, but my head is spinning after work and a long drive home. Rather than do Ng's wonderful book a disservice, I'm going to postpone that review and pose questions to you, just for fun, instead. Are you lucky or what?

1. Can you name a crime-fiction writer with a series narrator of unknown gender?

2. An unnamed woman ("the biologist") narrates Annihilation, the first book in Jeff VanderMeer's dystopian Southern Reach trilogy. Can you remember an earlier book of crime fiction with an unnamed female narrator? Hint: it's famous.

3. We never learn the first name; we only know the first two initials and last name of this crime-fiction series protagonist. What's the name of the character's creator?

4. In one of Raymond Chandler's books, Philip Marlowe disparages a famous real-life writer. Which book, and which writer?

5. This man, expert in his occupation, turned to writing upon retirement when his wife wanted the money for a new carpet. He put his previous job experience to good work; he's now much better known as a writer. Can you name him?

6. Who would you pick to write a crime noir version of Macbeth? Check to see if your answer matches the writer the Hogarth Shakespeare series chose.


7. This classic thriller tells the story of a British aristocrat who tries to assassinate a dictator. What is the book's title, and what dictator was the author really writing about?

8. What recipe would you expect from Dashiell Hammett's Nick and Nora Charles?

9. Jim Thompson came up with the title A Swell-Looking Babe for his 1954 book. Peter Lovesey penned Abracadaver in 1972. There's no one answer to this question; come up with another great title.

10. What are the last words in the 1941 movie version of The Maltese Falcon? 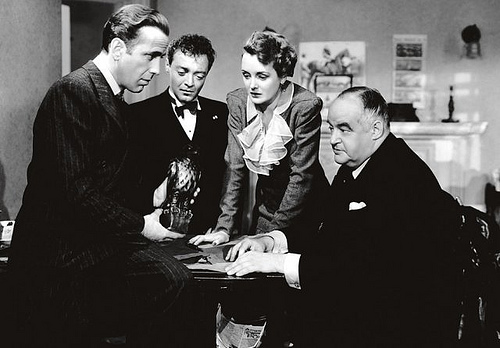 Answers will come on Sunday.
Posted by Georgette Spelvin at 11:59 PM