Everyone would like a little extra something sometimes. That little bit of brain power or looks or money or energy that we think would make our lives go more smoothly. But be careful what you wish for; that little something may come at a price you weren't prepared to pay, as these two women learn in the following stories.

The Gauguin Connection by Estelle Ryan

Genevieve Lenard has a doctorate in psychology with a specialty in body language. She is considered to be one of the three top facial expression readers in the world. The autistic, antisocial genius spends most of her days in the private viewing room at Rousseau & Rousseau, an insurer of art treasures; a room tailored specifically to her needs and abilities by Phillip Rousseau. From here, on her 10 monitors, she studies the minute facial expressions and body language of clients and dealers. The world of fine art is fraught with fraud, and Phillip estimates that her uncanny powers of observation and analytical abilities have already saved his firm over six million Euros.

Generally, she is left to work in peace, but one morning Phillip calls her into his office to meet an old friend with a big problem. "Pleased to meet you, Ms. Lenard," says Colonel Manfred Millard of the European Defense Agency, holding out his hand. "It's Dr. Lenard. And you're not," she replies. Genevieve doesn't touch people, ride in cabs, or eat in any restaurant that won't let her examine the kitchen beforehand. She never lies and, like many autistic people, she has a whole raft of compulsive behaviors that are inexplicable and often offensive in social settings. Her parents, both career diplomats, despaired of her, and had spent most of her childhood trying to "fix" her. 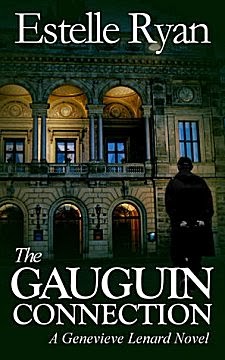 Colonel Millard is prepared to tolerate almost anything if she can help solve his problem. Thousands of EDA weapons have apparently gone missing and inventory reports been falsified over a number of years. The systematic thefts were only discovered when a young girl was murdered in Paris with one of the missing weapons. Viewing the crime scene photos drove Genevieve back into her mind, where she rewrites Mozart's music when overwhelmed and unable to cope with external events. Nonetheless, Phillip promises their help to Millard. When Genevieve's flat is later broken into by an international art thief determined to help find the killer of a young friend also shot by one of the missing weapons, her carefully structured life swings wildly out of control.

This is a curious and complex story, told in the first person by a brilliant woman with autism. I got tired of some of Genevieve's behaviors, and some of her responses didn't quite ring true, but the characters were interesting and kept me reading, even if some were a bit (OK, a lot) over the top. The European agencies, with their overlapping relationships and spheres of authority, confused me somewhat, but understanding them wasn't critical to following the story. This was the author's debut novel, and I will read further in the series to get some of the back stories of the motley crew of gifted misfits that Genevieve manages to collect around her.

The Blood Whisperer by Zoe Sharp

From the author of the popular Charlie Fox series comes this stand-alone thriller. Kelly Jacks is a disgraced crime scene investigator. Six years ago, she woke up in a strange bed with a dead man beside her. She had no memory of the man or of how she got there, and she certainly didn't remember stabbing him to death! She served two years for involuntary manslaughter, and was, of course, fired from the police department, where she had been so competent that coworkers called her "the blood whisperer." She still can't remember that horrible night.

Now, she and her young partner, Tyrone, clean up bio-hazardous sites, including crime scenes, after the police and technicians have left. Called to a plush apartment where a woman had shot herself in the bathtub, Kelly's professional instincts are alerted when the blood spatter pattern is wrong. Police have already closed the case as suicide, but stubborn Kelly insists on taking pictures of the scene and sending them to her boss before they clean it up. When Matthew Lytton, husband of the deceased woman shows up and gives them a hard time, Kelly explains the discrepancies in detail. That is her first mistake. Then her boss, a retired cop, is badly beaten and warned off. Kelly wakes up in bed with another murder victim, and she is forced to go on the run. The rest of the story is sort of a stew of Russian and Irish thugs, interspersed with an unlikely love interest between Kelly and Lytton, and police malfeasance. Halfway through, there are few surprises left. This is the first book I've read by this author, and it seemed way too long for the rather thin plot. Kelly's unusual gift, which originally caught my interest, is of no further use to her or the story. The sentence structure and dialog are somewhat stilted, as if the book had been translated from another language. It almost seems geared to a younger market, although the pervasive violence would seem to belie that.

So there you have it: two women with very unusual skills, exercised with unexpected and very dangerous results. I'm wondering now what undiscovered and untapped ability to wish for, and what the consequences of using it might be.
Posted by Periphera at 4:00 AM