It has been many years since I read a self-help book (I'm pretty much beyond help at this point), but The Good Psychopath's Guide to Success caught my eye and fancy. Catchy title, and it deals with a kind of cop-out increasingly common in mysteries and thrillers, and possibly in the real world as well. Who, what, where, when, and why are the five Ws of mystery fiction, and readers love digging them out alongside the detective. But as soon as the word "psychopath" is applied to the culprit, motive becomes moot.

Psychopaths in fiction are understood to be serial killers for motives barely discernible or sufficient to the rest of us. Once one appears, the balance of the story, while it will likely contain some hair-raising passages, is actually pretty lame and pointless for the avid armchair investigator. It morphs into a race-to-catch-him-before-he-kills-again thriller. So who are these mysterious story spoilers, these cold fish, these mass murderers, and what drives them to do what they do?

Professor Kevin Dutton is a fellow of the Royal Society of Medicine and of the Society for the Scientific Study of Psychopathy. He has spent his career at the University of Oxford studying psychopaths, and is the author of a previous popular science book on the subject, The Wisdom of Psychopaths: What Saints, Spies, and Serial Killers Can Teach Us about Success.

Andy McNab is a former SAS officer and the successful author of several war thrillers, two of which are purported autobiographies of action during the Iraq War. He is also the highest scorer ever in Dr. Dutton's ongoing psychopathic research project.

The purpose of The Good Psychopath's Guide to Success, co-authored by this unlikely pair, is to expose the more useful qualities of the psychopath and to teach the diligent reader how to get in touch with them in himself, to improve his own life.

Many of the qualities Dutton attributes to psychopaths are positive or neutral. Charisma, fearlessness and mental toughness, ability to monofocus, and impulsivity are all normal and generally harmless traits. But add in a total lack of both empathy and the capacity for remorse, and you may be looking at a psychopath. Not that psychopaths don't understand empathy on an intellectual level; they don't––literally can't, if Dutton is correct––feel it, although most of them are superb manipulators of the emotions of others. This seems confusing, in light of his apparently conflicting theory that psychopathic characteristics can be selected and reinforced in the average person. Like many self-help books, this one has interactive quizzes at the end of many chapters, so you can evaluate your own psychopathic tendencies. Or you can take this test online.

So what did I learn from this book? I learned that brain patterns in psychopaths are different from the norm. Parts of the amygdala, the "crocodile brain" that controls emotion, are missing or malfunctioning in psychopaths. Many of the qualities that define psychopathy are present in all of us, in varying degrees at various times, but the psychopath is literally unable to make certain mental and emotional leaps and connections that define civilized society.

In war and sports, psychophaths can be assets; their lightning-fast decisiveness, fearlessness, and unrelenting drive toward a goal, regardless of the price paid––by others––can achieve objectives the more scrupulous might not. Their criminality, or lack of it, seems to be situational, rather than proceeding from anything recognizable as conscience or empathy. The cleverest of them may become CEOs of major corporations, sports stars, or politicians. However, according to this article in LiveScience, while psychopaths make up only one percent of the general population, they comprise 25 percent of all men in federal prisons. Yikes! 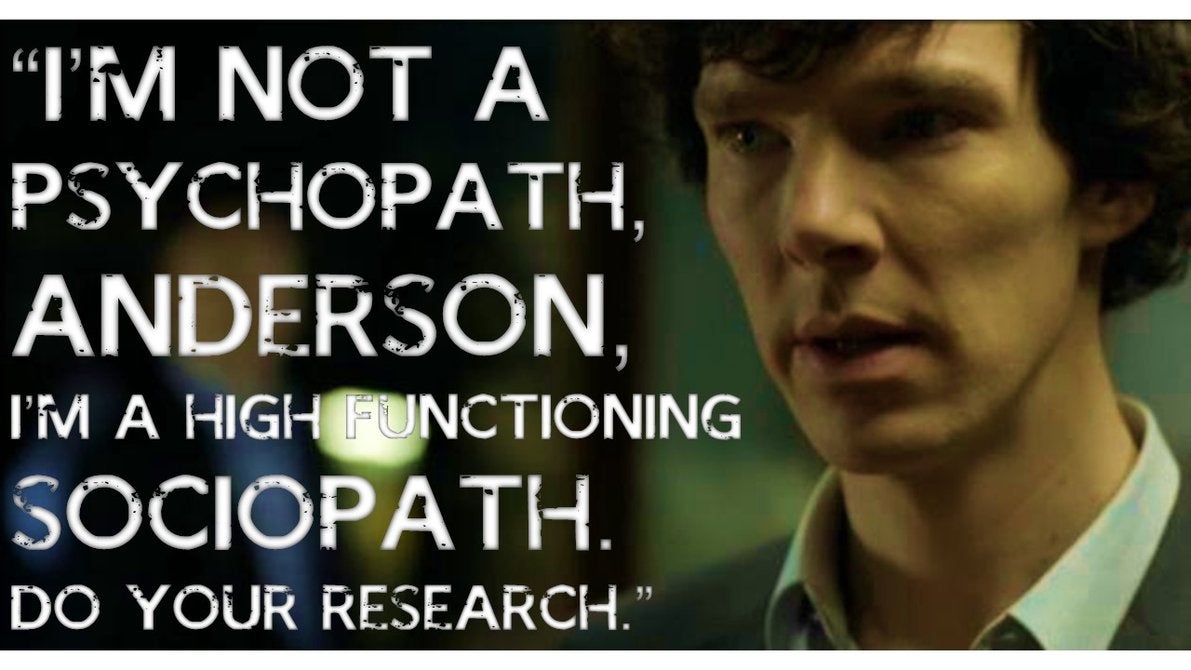 The Good Psychopath's Guide had rather a lot of chummy "me and my mate Andy" passages that made me wonder a bit about the relationship between researcher and subject. And an annoyingly EXCESSIVE number of words were CAPITALIZED, presumably for emphasis. The sections Andy wrote display a level of narcissism and sheer bloody-mindedness that we might expect from a psychopath. What I hadn't expected was his pervasive sense of humor, even when discussing the torture he underwent as a POW in Iraq.

But did any of this help me to better understand and appreciate the psychopath of detective fiction? Or how to channel my own inner psychopath to improve my life? Not really; the emotional disconnect required seems to be inborn or learned very young. The message seems to be: don't waffle, go straight for what you want, ignoring any faces you happen to step on in the process, unless they can be useful to you. Don't take anything personally, even defeat, but look for advantage in every event. (Nice if you can manage it.)

The book was full of wickedly humorous anecdotes, and several jokes that seemed to be stuck in anywhere, rather than to illustrate a particular point. It offers a lively and interesting, if somewhat troubling, look at a condition most of us, I hope, will never really understand. Hannibal Lecter and The Joker are no more comprehensible to me than they were before.
Posted by Periphera at 4:00 AM