There are too many good books due out this fall for us to tell you about all of them, but let's take a look at the ones I have for today. The Front Seat Passenger (translated from the French by Jane Aitken; Gallic Books, September 9) will be my first book by the late noir writer Pascal Garnier. It looks like a gem for fans of Patricia Highsmith.

Fabien Delorme returns from Normandy to his home in Paris to discover his wife, Sylvie, and her lover were killed in a car accident. The existence of an affair is a shock to Fabien. He spots the wife of Sylvie's lover, Martine, leaving the morgue and, feeling vengeful, decides he needs to get close to her. Insinuating himself into her life is a little difficult due to the presence of her best friend, Madeleine. This is noir, so I'm betting all of the characters do not have a jolly good time. John Darnielle's Sean Phillips was severely disfigured in an accident when he was 17 and rarely leaves his southern California home. Sean designed and operates a text-based role-playing game, Trace Italian, set in a future post-apocalyptic America and played through the mail. The reader knows a woman was somehow killed when she obsessively played Trace with her boyfriend. It's no wonder Sean takes steps when two Florida teenagers, Lance and Carrie, decide to play the game in the real world.

Darnielle is the singer-songwriter of the Mountain Goats, and his Wolf in White Van (Farrar, Straus & Giroux, September 16) is saturated in pop culture and shifts around in time. Marilynne Robinson's books are powerful––yet quiet and moving––meditations on faith and descriptions of life and death in the rural American Midwest. Lila (Farrar, Straus & Giroux, October 7) follows Gilead and Home, continuing the three-generational saga of Congregationalist minister John Ames and his neighbors in tiny Gilead, Iowa.

Lila is a homeless stranger in Gilead when she steps into John's church, seeking shelter from the rain. She returns every Sunday thereafter, and, when he's age 67 in the mid-1950s, the widower John marries her. She begins a new life as wife and mother of their son. In Gilead, we learn about John and his forebears. Lila now tells Lila's story.

Wow, I didn't intend to embark on a reading journey about faith and redemption, but here we are, following the gentle Calvinist Marilynne Robinson with Michel Faber, whose highly anticipated fall novel, The Book of Strange New Things (Crown/Hogarth, October 28), is about a missionary named Peter. USIC, a global corporation, sends Peter to the planet Oasis. The Oasans seem very receptive to Peter, so that isn't the problem. Peter's wife, Bea, lives on Earth, and Bea's letters report an Earth wracked by typhoons and earthquakes. Peter is now torn.

Anyone who read Faber's The Crimson Petal and the White, featuring a 19-year-old prostitute in Victorian London, knows that this writer is impossible to pigeonhole. This latest book should be good. I have a difficult time passing up novels about the rural American West. Publishers Weekly, Kirkus Reviews, and early reviewers think very highly of this one. They call Braden Hepner, first-time author of Pale Harvest (Torrey House, distributed by Consortium, September 9), a masterful story-teller with "a starkly poetic voice."

Hepner's Jack Selvedge grew up working on his family dairy farm in Juniper Scrag, Utah. He's now 20, and the farm is a shell of its former self. His dreams for the future change when he takes up with the beautiful Rebekah Rainsford, who's reticent about her past. While I was researching Jane Smiley's Some Luck (Knopf, October 7), it cracked me up to see Kirkus refer to her A Thousand Acres as "Lear in Iowa." Yep, that's it in a nutshell.

Smiley returns to Iowa with Some Luck, the first book in a planned trilogy. Instead of the raging Larry Cook and his conniving daughters of A Thousand Acres, we have Rosanna and Walter Langdon, a loving couple who live on their Denby farm with five very different children: first-born Frank, animal-lover Jo, sweet Lilian, bookworm Henry, and Claire, her father's favorite. This book covers the 1920s through the early '50s, while the children grow up and leave or stay home on the farm. Later books will take the family into the 21st century. I don't expect Smiley to be overly sweet or sentimental.

I'm always interested in what Urban Waite is writing, because he sets his crime fiction in the Pacific Northwest, where I grew up, and he does a bang-up job with a man on the run.

His Sometimes the Wolf (Morrow, October 21) involves a couple of characters whom we met in Waite's first book, The Terror of Living: Deputy Sheriff Bobby Drake and his dad, Patrick Drake, a former sheriff turned drug smuggler after his wife died and he fell on hard financial times, now out of prison on parole. Bobby's marriage is in poor repair so he only reluctantly offers his dad a place to stay. Bobby is still angry at Patrick and doesn't know whether he can trust him. Washing up from Patrick's past is a threat neither man can ignore. Then there's the wolf, the first one to be seen in these parts for 50 years; Bobby joins efforts to rescue it before it is killed by ranchers worried about their livestock. All of us have our eccentricities, and one of mine is an interest in sieges. Here's an international best-seller about the 1714 Siege of Barcelona written by the Catalonian anthropologist and writer Albert Sánchez Piñol. Victus: The Fall of Barcelona (translated from the Spanish by Daniel Hahn and Tom Bunstead; Harper/HarperCollins, September 9) is historical fiction illustrated with diagrams, portraits, and maps. According to reviewers, this isn't dry history; Piñol brings the siege to life in this novel.

Upon the death of the Spanish king at the turn of the 18th century, Bourbons and Castilians are warring against Catalonians in the War of the Spanish Succession. Maneuvering like a Machiavelli among them and fighting on both sides is Martí Zuviría, a military engineer and tactician charged with the defense of Barcelona against the Bourbons. 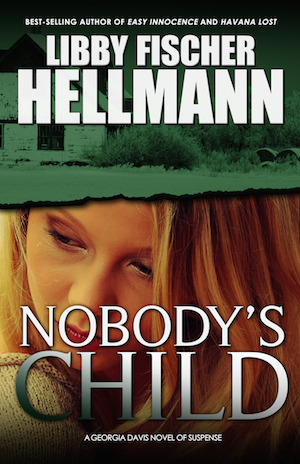 In recent years, Chicago writer Libby Fischer Hellmann has concentrated on non-series crime fiction that explores the effect of strife or revolution on the human spirit. Set the Night on Fire involves present-day multiple murder rooted in Chicago's turbulent late-1960s. A Bitter Veil is a thriller set against the backdrop of the Iranian Revolution. Havana Lost, set in Cuba, Angola, and Chicago, examines what violence has cost the Pacellis, a Chicago Outfit family.

Hellmann's most recent book is the fourth in what one reviewer calls her "medium-boiled" Georgia Davis series, although it can be read as a standalone. Georgia is a former Chicago cop who is now a private detective. In Nobody's Child (The Red Herrings Press, September 2), Georgia discovers she has a half-sister, Savannah, who is caught up in a human trafficking ring led by a very dangerous old enemy.

One early morning in 1886, Ulysses Pope grabs a chicken, tucks it under his arm, and leaves his family on the western prairie of Minnesota. He hopes to save his soul by coming to terms with his past. His wife, Gretta, and their two young sons, Eli and Danny, have no idea why he's left or where he's gone. Eli and Danny take off after their dad, hopping trains and following clues to Montana. In a while, heading after her sons and Ulysses, Gretta makes it four Popes on the road (well, okay, five, if you count the chicken, assuming Ulysses hasn't eaten it, and its last name is Pope). All right!

That wraps it up for me today. Tomorrow, we'll see what Maltese Condor has to show us.