When one of the world's most valuable manuscripts, the 12th century Codex Calixtinus, was stolen in July from the Cathedral of Santiago de Compostela in Spain, the news made barely a ripple in the world press. The Codex, in addition to its breathtaking illuminated pages, contains what is considered one of the world's first travel guides for pilgrims making the long and dangerous journey on foot to the shrine of St. James the Elder, believed to be buried there.

On Thursday, July 7, church authorities in the Spanish town of Santiago de Compostela publicly confirmed that the priceless 12th century manuscript had been stolen from a safe in the cathedral vault. According to the local press, when the theft was discovered, the keys to the safe were still hanging in the lock.... The illuminated Codex was apparently removed from the cathedral archives on July 5 and reported missing to police the following day. 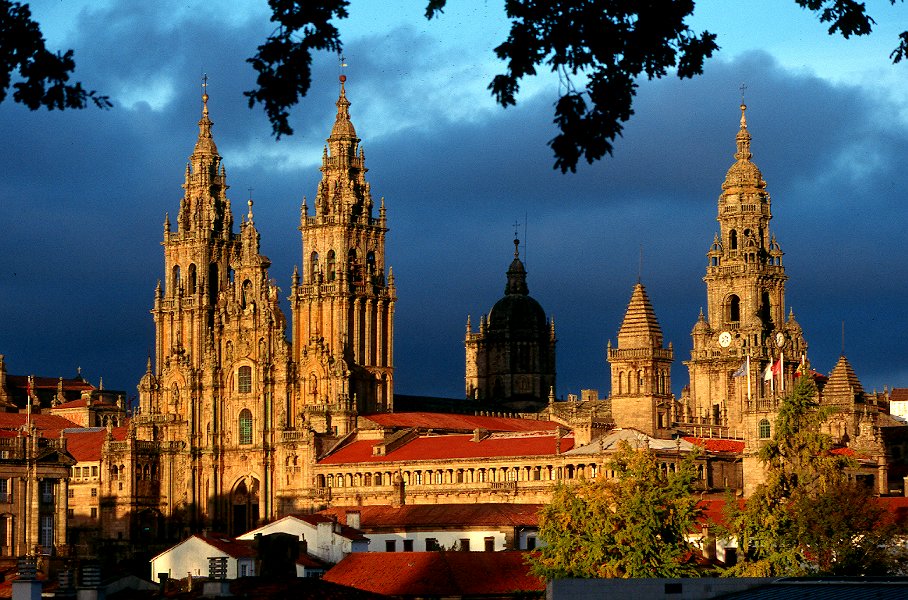 Only three people, according to Jose Maria Diaz, Dean and Canon Archivist of the Cathedral, had keys to the safe in which the original manuscript was kept. While other approved researchers had access to the vault in which it resided, they worked with a copy, not the original manuscript. "If I suspect anyone I won't say who because it's a sin to make rash accusations," Diaz told reporters. Let's hope he was a little more forthcoming with the police!

There were reportedly five security cameras in the vault, but not one was trained on the all-important safe, and no alarm was mentioned. I have been unable to find any further clarification of whose keys they were, or if they were illicit copies. No dissident group has come forward to claim responsibility and no ransom demand was published, so the national police think it was most likely stolen on behalf of a collector. And there the public story stops–for now and possibly for generations. It's frustrating that a great caper story may never be known, or the irreplaceable volume recovered, isn't it? Fictional detectives could have solved the mystery and recovered the artifact in 300 pages or so. I have subscribed to a news feed on the theft and will post any significant progress, although the worldwide recovery rate for rare stolen art is only around 20%.

The entire Codex, measuring about 8-1/2" by 11-1/2" consists of 225 double-sided leaves divided into five sections. The relatively small size would make it fairly easy to hide under a jacket or cassock. It would be terrible if it were broken up and the illustrated leaves sold separately, as has been done with many stolen manuscripts.

The religious and the historical sections it contains were meant to be chanted; the actual musical scores form another section of the book. Most pilgrims and many monks of the period were illiterate, so the plainchant was used as a mnemonic aid.

For centuries before the creation of the Codex, the cathedral, which houses the tomb of St. James the Apostle, has been an important destination for pilgrims. Thousands of people from all over the world still follow one of the "sanctioned" routes each year, leaving electricity and cell phone towers behind to travel 500 or more arduous miles on foot for reasons that vary from reverence to adventure to spiritual enlightenment to decompression from their stressful lives. According to Wikipedia, the travel section of the Codex contained "relics they should venerate, sanctuaries they should visit, and commercial scams and bad food they should be wary of." I'm not sure if the travel section was sung, although chanting things like Do not stay at Pedro's in Barcelona; His guests all get scabies and diarrhea, would certainly have been a useful reminder to pilgrims in those perilous times.

In the movie The Way, actor Martin Sheen stars as a father who completes the journey in memory of his son, who died along the route. While I haven't seen it, the scenery has been described as spectacular, and much of the route is still unpaved and very rough. A friend who has made the trip twice and hopes to lead a group next year says it probably hasn't changed all that much in the last thousand years. She also says, "The Spanish don't believe in switchbacks; one of the hills we walked straight up was signed as a fifteen percent grade." Yikes!


Update: According to a local newspaper, La Voz de Galicia, the bishop has finally accepted Diaz's resignation as Canon Archivist, although Diaz will continue as Dean of the Cathedral. How sad to have a prestigious 35-year career as archivist end on such a note!
Posted by Periphera at 4:00 AM