Book Review of Peter Robinson's Before the Poison

Before the Poison by Peter Robinson

Chris Lowndes is a Yorkshireman who has made a successful Oscar-winning career in Hollywood, writing music for the movies. But he's always dreamed of one day returning to live in the Yorkshire Dales, and his beloved wife, Laura, was happy to agree. When cancer takes Laura, the devastated Chris decides to continue with the plan, spending the next year making arrangements, including buying a house, called Kilnsgate, in the countryside.

Meeting up with Heather, his attractive realtor, upon arriving at Kilnsgate for the first time, Chris notices she seems a little cagey about the house's history. He soon learns that Heather somehow neglected to tell him that the house has a deadly past. During a Christmas holiday dinner with friends in 1953, a blizzard snows everyone in. Late that night, the host, Doctor Fox, died of an apparent heart attack. But, upon investigation, it is ruled that the true cause of death was poison. Rumors swirl that Fox's wife––and nurse in his medical practice––was having an affair with a much younger man from the village and that she did away with Fox so that she could be with her lover. In short order, and with very little actual evidence, Grace Fox is convicted of murder and becomes the next-to-last woman hanged in England.

At first simply curious to find out more about the house's history, its residents and the murder, Chris soon becomes nearly obsessed, almost literally haunted by Grace and determined to find out what really happened that fateful winter night in 1953. Chris's investigation takes him to France and South Africa to talk to people who knew Grace, including her lover and people who served with her in the nursing services under nightmarish conditions during World War II in the Pacific.

When he is in Yorkshire, Chris works to make the new life that he and Laura had planned. He settles into the house and village, making new friends, taking long walks and enjoying the beauty of the Dales. When he is alone, he devotes much of his time to composing a sonata to honor Laura's memory and trying to come to terms with her death. 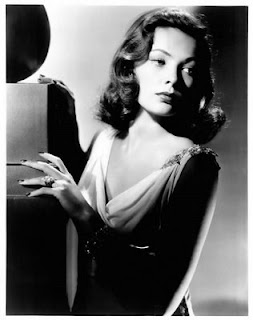 Chris's preoccupation with Grace and Laura brought to mind Vera Caspary's book, Laura––and the movie adaptation starring Dana Andrews and Gene Tierney––in which a private detective becomes obsessed with the dead Laura, whose death he is investigating. Chris is tormented by his own dead Laura and, in the dreams that come to him nearly every night, Grace and Laura become confused.

Peter Robinson is best known for his long-running police procedural series featuring Detective Chief Inspector Alan Banks. If you are familiar with that series, you'll find this book to be very much a departure from its style. This is not a police procedural. It's a first-person narrative in two senses: Chris's story and the interspersed excerpts from Grace's diary of her harrowing experiences in the Far East and in France during the war. The narratives give the book a feeling of immediacy and intimacy. In the first part of the novel, there are also excerpts from a book describing Grace's trial. These excerpts are chilling, because they show how her conviction was based on prejudice and help us identify with Chris's compulsion to investigate.

The contemporary story is set in late autumn and winter, and Robinson paints a vivid picture of Chris's new home; the beauty of the countryside, the quiet of falling snow, the warmth and conviviality of an evening in the local pub or at home enjoying good food and drink with family and friends. He brings Grace poignantly to life through her diary and the stories her old acquaintances tell Chris, and his descriptions of Grace's wartime experiences and of Yorkshire in the 1950s will make you feel you are there.

The book has some weaknesses. Its ending was abrupt, and Robinson includes a budding romance between Chris and Heather that is unconvincing because his characterization of Heather didn't convey anything that made her seem attractive. And that's even if you ignore her trying to pull a fast one on him about the house's history. But these problems are fairly minor and don't stand in the way of my recommending the book. I'm glad Peter Robinson took a break from the Alan Banks series to bring us this moving and involving story.

Note: I received a free review copy of this book. A version of this review appears on the Amazon product page, under my Amazon username.
Posted by Sister Mary Murderous at 4:00 AM