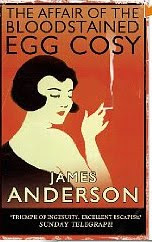 England's gracious country manors have probably hosted more fictional murders than the mean streets of any major city. They're just more discreet about them; preferring to sweep such embarrassing incidents under the rug, or at least keep them out of the newspapers! Like many readers, I can't seem to get enough of these nostalgic tales of luxurious lifestyles and leisurely weekends that aren't there any more, and was delighted recently to find a couple of new-to-me offerings.

A book tabled outside a used bookstore introduced me to the work of British author James Anderson and his lugubrious Detective Inspector Wilkins. Wilkins is a kind of counterpoint to Christie's Poirot: openly sure that he has been promoted beyond his ability and "not sanguine, not sanguine at all, M'Lord" about his ability to resolve the case at hand. After which, of course, he solves the crime quite handily through a series of brilliant Poirot-like deductions. The crimes take place at Alderly, the small (a mere dozen guest rooms, imagine!) but lovely manor house of George Saunders, 12th Earl of Burford, his wife Lavinia, and their daughter Gerry. In The Affair of the Bloodstained Egg Cozy, Gerry invites her orphaned and impecunious friend Jane Clifton for a long weekend even as her Uncle Richard, a government minister, is preparing to conduct secret negotiations with representatives of a foreign power at Alderly. The Earl has invited a Texas millionaire and fellow gun collector with his wife and secretary, and the Countess expects a notorious sponger who "hangs around like a flu bug" according to the Earl, as well as an author researching Gracious Country Homes of Britain for an upcoming book.

Full house at Alderly this weekend, and a very odd mix, thinks the venerable butler Merryweather as he scans the guest list. And 13 at dinner, how very unfortunate. But as it happens, a French baroness traveling past has a fortuitous road accident and is invited to stay while her car is repaired. Poor Lord Burford is greatly relieved that he won't have to plead illness and dine alone in his bedroom to even the table after all! Between the open-handed affability of the Earl and the social skills of his Countess, Alderly prides itself on its hospitality. However, its lavender-scented linen-clad beds must be pretty uncomfortable––or perhaps it was the thunderstorm?––but on Saturday night it seemed nearly everyone was creeping around the dark halls on clandestine errands, bumping and thumping each other, none of them on the, er, usual romantic business. The Sunday sun rises on two fewer guests, one found shot in the lake and the other found equally dead in a well-publicized secret passage. A fortune in jewels and a pair of rare dueling pistols have also disappeared.

This book is a wonderful tongue-in-cheek romp through mystery's Golden Age, with frequent allusions, both direct and subtle, to the famous fictional detectives and mysteries of the period. It has everything a proper country house-party needs: spies, thieves, blackmailers, murderers, as well as a very creative method of disposing of a body. The book included a map, but I really needed a list of the characters and a flowchart to keep track of the action. Who done it came as a complete surprise to me. 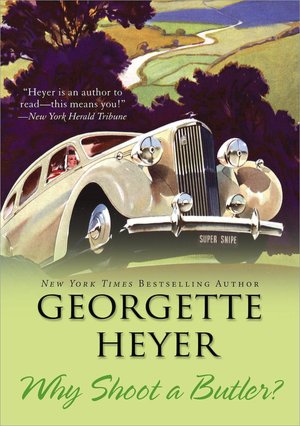 A true confession: Regency romances, aside from Austen's, bore me to tears. I overdosed so badly in my teens that the sight of an empire waistline on a book cover can drive me straight to another aisle. Despite this, I picked up regency queen Georgette Heyer's Why Shoot a Butler? for the charming vintage––and definitely not Regency––cover.

Frank Amberly is motoring to Graythorne, his uncle's country place, for a long weekend and gets exasperatingly lost in the dark and mist. Finally passing an Austin pulled over by the side of the road, he asks rather rudely for directions. An equally rude young woman standing by the car directs him back the way he had come.

As he cautiously turns the Bentley in the narrow lane, his headlights pick up a man slumped behind the starred windscreen of the Austin, his shirt bloody. The young woman won't give her name or come with him to the police station to report the death. While she is carrying a gun, Amberly determines that it has not been recently fired, so he leave her there and gallantly doesn't mention her presence at the scene to the police.

While the story line here was a little different from one of Heyer's romances, the villains were obvious and odious, and the love-hate relationship developing between Amberly and one of the suspects took up quite a bit of the book. Not a keeper for me, or an author I'll look for again.

Now I'm torn. How to spend the afternoon? Tennis, or maybe golf? Or curl up with a cozy fire and a book in the dear old library with its floor-to-ceiling bookshelves? Darling, please ring for tea. We'll have it in here, not in the drawing room––so cozy, isn't it? 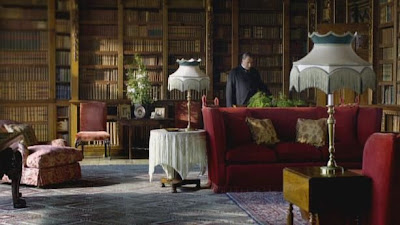