"Beyond a reasonable doubt." These must be the most dismaying words a juror in a murder trial will ever hear. I was once blessedly released on challenge from serving as juror in an ugly murder case. Having already thought of another possible solution to the baldly presented outline, I had hoped not to get to that point, despite the apparent soundness of the prosecution's case. Mystery readers must make uneasy jurors; they see too many possibilities. Real life is rarely wrapped up as neatly as a fictional murder mystery; there are always haunting questions left unanswered, their relevance to the case forever unexplored.

British author Andrew Taylor plays on this uncertainty very effectively in his atmospheric, character-driven Roth Trilogy. This short series tracing back the history of a serial killer was published and meant to be read in reverse chronological order. Knowing the identity of the criminal (at least of most of the murders, I think) only enhances the creepiness of this convoluted study of evil and murder. 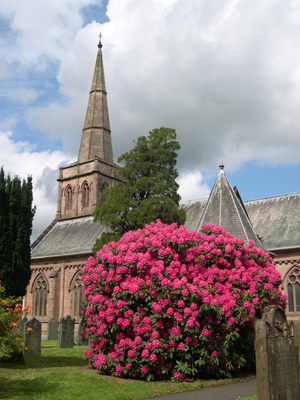 Deacon Sally Appleyard and her policeman husband Michael are having trouble balancing their jobs, marriage, and daycare for their four-year-old daughter Lucy in today's frantic London. In The Four Last Things, the only book of the trilogy written in the omniscient third person, we watch as Lucy, sneaking away from her babysitter's house to buy the magic kit her mother had earlier refused her, is kidnapped and taken into the care of a strange woman called Angel.

While Lucy is locked in a basement and often not fed, Angel goes downstairs regularly to spend time with her, brushing her hair and reading her stories. Along with Eddie Grace, the abductor who owns the house, we worry about what might be going on in that basement; but that is one door that no one but Angel may cross. Eddie also worries about the large chest freezer that Angel had purchased years earlier and always keeps padlocked, but is too enthralled and terrified by her beauty and stronger character to cross or question her. She reassures him obliquely that "this child is different. She is special."

While Sally desperately waits and hopes for word of Lucy, her husband Michael, banned from helping in the search for his daughter, abandons her and flees for support to his godfather David Byfield, who strongly disapproves of Sally's churchly profession. When dismembered pieces of young girls' bodies wearing Lucy's clothes begin showing up, the distraught Sally wonders if the public curses of "heretic" and "whore" inexplicably screamed at her by a strange old woman during her first sermon could have been effective. She seeks out the old woman only to learn that Audrey Oliphant, a newcomer to the area, died shortly after her public scene in the church. The last line of this thriller dropped my jaw and drove me to start the next as soon as possible.

Canon David Byfield is the narrator of The Judgment of Strangers, set in the 1970s. After the tragic suicide of his wife Janet many years earlier, he moved with his young daughter Rosemary to a parish in the ancient town of Roth. Handsome and virile, he is a magnet for the unattached women of the parish, much to the disgust of his now-teenage daughter. When a smitten widowed parishioner asks his help to publish her history of the city, he take the manuscript to Vanessa Forde, a specialty publisher he has met casually. Vanessa agrees to edit and publish Audrey's book, but questions why there is not more information in it about Roth's most infamous citizen, a Canon and poet of dubious character who died in the early years of the century. Thrown together by the book, the lonely David and Vanessa marry after a short courtship.

Vanessa's fascination with the unsavory deceased Canon deepens when she meets elderly Lady Youlgreave, the last surviving member of his family, and obtains her permission to study his journals and related papers. As the two women delve into Francis Youlgreave's life, mutilated animals begin showing up, beginning with Audrey Oliphant's beloved cat Lord Peter, found headless outside the church. Animal mutilation was one of the things that Francis had been suspected of during his life. Lady Youlgreave subsequently dies in curious circumstances shortly after instructing her maid to throw out many of Francis's papers.

Despite her grief over the butchery of her cherished pet, Audrey presses forward with arrangements for the parish fete. (Remember, this series is in reverse chronological order, which explains why Audrey is alive in this book and dead in the preceding book.) David's daughter Rosemary, home from school for the summer, and his visiting godson Michael Appleyard are particularly excited to have been invited to the swim party at the manor afterwards. Like so many events in these stories, this one ends in tragedy and horror.

The Office of the Dead is told by Wendy Appleyard many years after the events of the 1950s that it chronicles. After leaving her unfaithful husband Henry, she is invited by her friend Janet Byfield to spend some time with Janet, her clergyman husband David, and their young daughter Rosie in the cathedral close at Rosington. She arrives to find the household in turmoil due to the unexpected arrival of Janet's slightly dotty father, toting his suitcase, an hour before. As Janet's father settles into his room and the women share a pot of tea, the screaming begins. 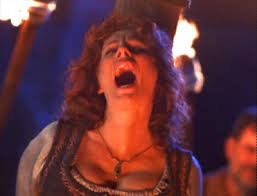 At loose ends and stony broke, Wendy accepts a job cataloging the seminary's woefully disorganized library. Among the uncatalogued books and notes she finds several left by the mad Canon Francis which include research notes of the burning of a heretic woman who declared herself priest after the incumbent died of plague in the early 1400s. A scrap of a ledger containing the Dean's complaint in 1402 of the unusually high cost of firewood for the burning of  heretics seems to corroborate the grisly story and the circle of hatred for women priests. Malum generat mali, aeternum!*

Even days after finishing this modern gothic trilogy, chilling connections I hadn't realized keep occurring to me. Characters and their histories and relationships weave in and out among these books like the unfortunate cat Lord Peter amid the ankles of the close. If you want your mystery tied up neatly with a bow at the end of every book, this series probably isn't for you. However, if you can cope with some ambiguity and no little horror, you might want to hunt up these books. Or do as I did; buy the omnibus edition called Requiem for an Angel, and gulp down the entire 900 brooding pages in a week.

*Evil begets evil, eternally.
Posted by Periphera at 4:00 AM