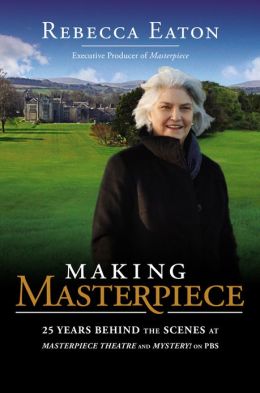 Making Masterpiece: 25 Years Behind the Scenes at Masterpiece Theatre and Mystery! on PBS by Rebecca Eaton

Whenever I pick up a history, memoir or biography, the first thing I do is look at the pictures. Naturally, that's what I did when I got home from the library with Making Masterpiece. I was puzzled, because the first photos in the book are of the author as a young girl. I thought this was a book about producing PBS's Masterpiece Theatre and Mystery! series, not about the author's life. It turns out that it's both and it also turns out that's mostly a good thing.

Eaton, born in 1947, was a Vassar student when a school apprenticeship program allowed her to intern at the BBC and get her introduction to media production. Returning home to Boston, she got a job at WGBH (jokingly referred to when I was growing up as God Bless Harvard), which we now know as one of PBS's flagship stations and original home to Julia Child's The French Chef and This Old House, among many others.

WGBH decided that what America needed on television was British costume dramas, and what the new Masterpiece Theatre program did, starting in 1971, was to import them from London. At first, these were almost entirely miniseries that had been produced by the BBC and shown in the UK. PBS producers would fly to London for long teas, dinners and meetings to see what might be available and make choices. As the years went by, PBS began to coproduce with their British counterparts, and not rely entirely on already-produced material.

Most of us remember the first huge hit on Masterpiece Theatre: Upstairs, Downstairs, from 1974, and the host who introduced each week's episode, that comforting combination of wise old uncle and Oxford don, Alistair Cooke. Do you remember also how the show was always sponsored by Mobil Oil? It turns out that PBS itself didn't fund the show at all; it was pretty much all Mobil. Back in the 1970s, and for the next 20 years, Big Oil thought it would be good image-burnishing to sponsor uplifting––but still popular––television.

When original Masterpiece Theatre executive producer Joan Wilson died, Rebecca Eaton stepped into her shoes, taking responsibility for both Masterpiece Theatre and Mystery!  It was a
daunting assignment for Eaton, who hadn't ever understood the appeal of mysteries, who had just discovered she and relatively new husband Paul were expecting a baby, and who felt she didn't have nearly enough experience to take over from Wilson.

Executive positions in television weren't all that common for women in the early 1970s, and starting the job when pregnant was a real anomaly––Eaton followed convention and didn't tell any of the BBC and other television contacts in England about her condition, even when morning sickness forced her to flee meetings abruptly.

Eaton is very frank about her failures, like having to be talked into Prime Suspect, with Helen Mirren, and turning down the Colin Firth Pride & Prejudice miniseries because Masterpiece Theatre had shown a version years earlier. She even discloses that she had a run-in with contacts at Mobil about editorial influence, and Mobil insisted that PBS fire her. She wasn't fired, but she was put on probation and told she very much needed to work on her people skills. I don't think I'd want to confess something like that, so I had to admire Eaton's openness.

Eaton is also open about the difficulty of balancing work and home life; the toll it took in missed time with her daughter, miscarriages, her marriage. Occasionally, it felt like too much personal information––but then that's better than those stories from certain celebrities and high-powered executive women who talk about how you can have it all, when you know they do it with a truckload of cash and a team of assistants at work and at home.

"But what about the shows and the actors?" I hear you wondering. The book doesn't disappoint there. Eaton breezily recounts story after story about Helen Mirren, Diana Rigg, Kenneth Branagh, Paul Newman, Robert Redford, Princess Margaret (a big fan of Inspector Morse), Daniel Radcliffe, and the entire Downton Abbey cast.

Eaton has such an enormous respect for British actors; their devotion to the work, flexibility and lack of star attitude. She tells a particularly memorable story about Diana Rigg soldiering on without a word of complaint, though her husband had only just deserted her, at age 52 and with a 12-year-old daughter at home, for 20-something Joely Richardson. (Man, that British actor community is a small world! That 12-year-old daughter, Rachael Stirling, is now an actress who was recently featured in The Bletchley Circle––which was shown on PBS, by the way. And Joely Richardson, daughter of the famed Vanessa Redgrave, went on to marry producer Tim Bevan (Love, Actually), who dumped her for a younger woman. Their daughter, Daisy Bevan, is––not surprisingly––also an actress.)

Once cable TV came on the scene, soon after Eaton became executive producer, the mission of Masterpiece Theatre and Mystery! became much more challenging. Mobil felt it less and less necessary to spend millions as patrons of the arts and PBS didn't increase funding. After Eaton foolishly passed on the Pride & Prejudice miniseries, Arts & Entertainment snapped it up. (That was back when the "Arts" in that station's title actually meant something.) HBO, Showtime and other far better-funded outlets began to compete with PBS for British product.

And now, in the era of hundreds of TV stations, live streaming video, and so much competition for the consumer's entertainment dollars, Rebecca Eaton keeps on trying to find those dramas and mysteries that will keep viewers tuning in week after week. She's done a good job in recent years, what with Cranford, Inspector Lewis, Sherlock and the blockbuster Downton Abbey (not a favorite of mine, but there's no denying it's a phenomenal success in the US), and her obvious love of her job and dedication to the mission of bringing excellent programming to PBS promise more to come.

While it wasn't quite what I expected, Making Masterpiece ends up being a fascinating story of how Masterpiece (with what is now called three subdivisions: Classic, Contemporary and Mystery) is produced, filled with yummy gossipy bits about actors we're all familiar with, and a clear-eyed confession of the personal costs to a woman of having a demanding job over the last quarter century.

Making it a personal story illustrates how a little jog here and a bit of happenstance there can push a life in an unexpected direction, especially the discovery of a career that could never have been a dream job because it's a job you didn't even know existed. So even though I hadn't expected so much of Rebecca Eaton's own life to be represented in the book, it added a lot of texture and insight and made the book that much more interesting to read.

Now that I feel I've gotten to know Rebecca Eaton––and that she's learned her lesson about foolishly turning down remakes––maybe I can persuade her to mount a new production of the Lord Peter Wimsey mysteries, casting Laurence Fox (Hathaway in Inspector Lewis) as Lord Peter.

Note: Versions of this review may appear on Amazon, goodreads and other review sites under my usernames there.
Posted by Sister Mary Murderous at 4:00 AM