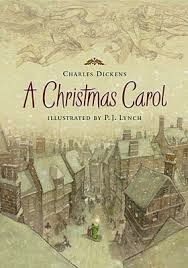 It has been 170 years since A Christmas Carol was first published on 17 December 1843. Since that time, it has been a perennial favorite for readers and moviegoers alike. You can pick and choose from the wonderful black and white 1951 version, or the 2009 version with Jim Carrey, or from many others in between.

Some of the pieces of The Christmas Carol have become part of the fabric of our daily lives, like the expression "Bah humbug!" The word "scrooge" itself has become part of our lexicon. 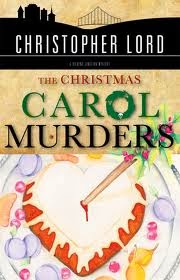 Sometimes people go to extremes in following the Dickensian star. For example, in The Christmas Carol Murders by Christopher Lord, we are introduced to Simon Alastair, who is the proprietor of a bookstore in the hamlet of Dickens Junction, near the Oregon coast. The town was founded by his grandfather as a tribute to Charles Dickens and the ideals he espoused in his literary works. Naturally, in the town center there is a statue of the author, and most of the businesses in the square have either Dickensian motifs or are named after one or another of the characters whom Dickens brought to life.

Simon's bookstore is called Pip's Pages, the local inn is Bleak House and of course there is an Old Curiosity Shop. In Dickens Junction, it is expedient to overlook the fact that Dickens himself was no paragon. Dickens shunned his wife, alienated her children from her and kept a mistress for years.

I have always thought of Christmas time, when it has come round—as a good time; a kind, forgiving, charitable, pleasant time; the only time I know of, in the long calendar of the year, when men and women seem by one consent to open their shut-up hearts freely, and to think of people below them as if they really were fellow-passengers to the grave, and not another race of creatures bound on other journeys. And therefore, Uncle, though it has never put a scrap of gold or silver in my pocket, I believe that it has done me good, and will do me good; and I say, "God bless it!" Charles Dickens, A Christmas Carol 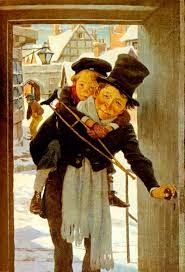 Dickens Junction comes to life at Christmas, when there are several events that attract the tourists; the first of which is a series of tableaux commemorating selected scenes from A Christmas Carol. Many of the merchants in the square participate, but of late a newcomer to town, Mervin Roark, who is representing a group called Marley's Enterprises, has been pestering them. He is offering exorbitant amounts of money for the property in the environs of the square.

He refuses to tell anyone what the purpose behind the purchases is. But Dickens Junction, like many places, is suffering greatly from the recession––or, as the merchants refer to it euphemistically, an economic downturn. Many could find security with this monetary offering. Before he has been in the town long he is dead, murdered in a Marleyesque fashion. Jacob Marley, who was Scrooge's business partner, is known to be as dead as a doornail. Roark is killed by a doornail. And his body is discovered at the Christmas Carol staging.

Old Marley was as dead as a doornail.

Mind! I don't mean to say that, of my own knowledge, what there is particularly dead about a doornail. I might have been inclined, myself, to regard a coffin-nail as the deadest piece of ironmongery in the trade. But the wisdom of our ancestors is in the simile; and my unhallowed hands shall not disturb it, or the Country's done for. You will therefore permit me to repeat, emphatically, that Marley was as dead as a doornail. Charles Dickens, A Christmas Carol

The next event is a competition for the best Dickensian village reconstruction, but this too is marred by the grotesque discovery of another body.

The discussions about motive swing widely from the idea that someone who wants to preserve the village's way of life is on a rampage, to the notion that the Marley Enterprises group has a subversive intent to do as much damage as possible. Simon feels that he is well placed to do some sleuthing on his hometown's behalf. 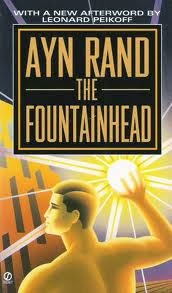 On the surface, the story is about a murderous Christmas; there is an underlying comparison between the collectivist philosophy of some of Ayn Rand's books and the idea of a social conscience that Dickens espoused. Who should be first? The group or the individual? I come here to say that I do not recognize anyone’s right to one minute of my life. Nor to any part of my energy. Nor to any achievement of mine. No matter who makes the claim, how large their number or how great their need. I wished to come here to say that I am a man who does not exist for others. (Howard Roark) Ann Rand, The Fountainhead

I'll take the side that it is the time of year for the lion to lie down with the lamb.   The story has a romantic subplot that is engaging. I did have to Google the definitions of certain fashion terms that Simon knew much better than I. There were the peplum jacket, the sock monkey PJ's and, finally, kitten heels. I didn't know cats had any.

Christopher Lord has a new book out called The Edwin Drood Murders modeled after the last book Charles Dickens wrote. I am looking forward to reading it. The Mystery of Edwin Drood was unfinished at the time of Dickens's death (9 June 1870) and his ending for it is unknown. Thus the identity of the murderer remains anyone's guess.
Posted by Maltese Condor at 4:00 AM