I couldn't resist looking at other books coming out this winter, and there are so many more that I know our friends here at Read Me Deadly will get excited about. Right here among the Material Witnesses, I know Georgette will be tapping her foot, impatiently waiting for Ariel Lawhon's The Wife, the Maid and the Mistress (Doubleday, January 28, 2014). I know that without even asking her, because she's always been fascinated by the mystery of Judge Crater's disappearance.

Judge Crater, you may know, was a trial court judge in New York City who, on a summer night in 1930, said goodnight to his mistress after having dinner with her and a lawyer friend. His dinner companions got into a cab on 45th Street, while Crater walked away down the sidewalk, never to be seen again. The hunt for Crater made headlines all over, leading to thousands of reported sightings everywhere, from the western deserts to China's Shanghai. The mystery of his disappearance has never been solved, though there is evidence that he was tied up in the famous Tammany Hall corruption of the time.

The disappearance of Judge Crater has been an obsession for many history buffs for years. It's like an earlier version of the mystery of Jimmy Hoffa's disappearance, only made more titillating because it's the story of a man who appeared to be propriety personified, but who definitely liked showgirls and may have been on the take in a big way.

One of the so-called "Craterites" just a few years ago wrote a novel about the mystery. That's Peter Quinn's The Man Who Never Returned (2005). But Ariel Lawhon's twist––given away by her title––is to tell a tale through the three women closest to him. I like the sound of that, and a historical mystery of Jazz Age Manhattan.

Do you find sometimes that just reading a book title draws you in? I felt I had to know more about Marina Mander's The First True Lie (Hogarth/Crown, January 21, 2014), just from the title. This looks like a very unusual coming-of-age story, to say the least. Young Luca has always been mostly on his own. His father left long ago, and his mother is wrapped up in her depression and the series of men she gets involved with but who don't stick around for long.

But Luca has his cat, Blue, and they are partners in life. When, one morning, Luca's mother doesn't wake up, Luca is smart enough to figure out that as soon as anybody finds out his mother is dead, he'll be shoved into an orphanage, and without Blue. So he doesn't tell anybody about what's behind his mother's bedroom door.

Doesn't that sound horrific? But the word is that this novella is transcendent. I hope so. And if not, at least it's short! Love Story, with Murders, by Harry Bingham (Delacorte, February 18, 2014), is another book whose title alone made me want to know more. I missed the first book in the Fiona Griffiths series, so the first thing I needed to do was to find out more about the protagonist. In stopyourekillingme.com, the tag line says Fiona is a young Detective Constable with a philosophy degree from Cambridge University who is stationed in Cardiff, Wales. That sounded good; I like Oxbridge-type mysteries and British police procedurals.

What stopyourekillingme.com doesn't say is that Fiona has to be just about the most unusual new protagonist to hit the mystery scene in years. You see, she has a mental illness. Not your garden-variety stuff, though. Nope, she suffers from Cotard's Syndrome, a rare mental illness in which the victim is convinced that he or she is actually dead. Makes you wonder how Harry Bingham thought of that one. Anyway, in the first book in the series, we learn that before she became a cop, she was actually locked up in a mental facility for a couple of years. Though she is quirky, to say the least, she has a sense of humor and a nose for detection. She'll need it in this second book in the series, what with two victims' body parts turning up all over Cardiff and its environs. 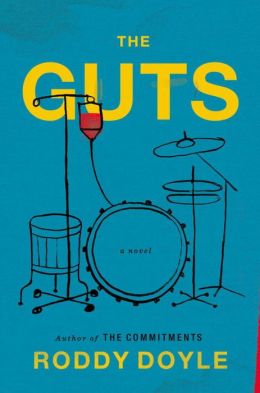 Now here's one where the title is not what would attract you, but once you know the author and the setup, it's a different story. It's Roddy Doyle's The Guts (Viking Adult, January 23, 2014). Roddy Doyle is the best-selling author of several books, including the so-called Barrytown Trilogy about the wrong-side-of-Dublin's-tracks family, the Rabbittes. The books in the trilogy—The Commitments, The Snapper and The Van—were all terrific in themselves and successfully translated to the screen. If you haven't read the books or seen the movies, consider yourself urged to do that ASAP.

In the first book in the Barrytown Trilogy, Jimmy Rabbitte, Jr. forms a soul band (yes, you read that right). In the second, his teenage sister Sharon gets knocked up, and in the third, his Da loses his job and decides to buy a chip van with his pal, Bimbo. In The Guts, Jimmy Jr. is almost 50, with a wife and four kids. A cancer diagnosis has him rediscovering his past and making closer connections with his present. Now that sounds kind of depressing, too, but this is Roddy Doyle we're talking about, so I'd be willing to bet it won't be. Assuming you're cozy and warm inside, is there anything more seasonally appropriate than a mystery set in Alaska? John Straley, best known for his Cecil Younger series, set in Sitka (say that three times fast), has a new standalone coming out called Cold Storage, Alaska (Soho Crime, February 4, 2014). Billed as "offbeat and often hilarious," the book takes us to the tiny fishing village of Cold Storage, and the return of its native son, Clive McCahon, fresh out of prison after his coke-dealing bust.

Clive really wants to get back on the straight and narrow, but that path's looking narrower all the time, what with a none-too-happy former business associate on one side and, on the other, a State Trooper just itching to put Clive back in the slammer.

I hear it gets fairly chilly in Copenhagen, Denmark in the winter too. But if you're still inside and still doing whatever it takes to keep yourself warmed up, you won't mind a trip there, will you? Take that trip with Jussi Adler-Olsen's fourth Department Q mystery, The Purity of Vengeance (Dutton, December 31, 2013), featuring Detective Carl Mørck.

Adler-Olsen specializes in ripping the pretty picture off Copenhagen's tourist brochures and focusing on Denmark's social ills. In this title, two stories are on a collision course. One is Department Q's investigation prompted by the discovery of several seemingly unrelated disappearances that happened at the same time 20 years earlier, and the other concerns Curt Wad, a surgeon who thought sterilizing wayward girls was a great idea in the 1950s and still feels that way today. One of the girls who came under his knife back then disagrees––and wants him to find out just how much.

Are you a devoted reader of mystery series? Stupid question. We're mystery readers, so of course we all have our series favorites. Here are just a few of the new series entries coming up.

Denise Mina has three series, the most recent being her Alex Morrow books, featuring a (female) Glasgow Detective Sergeant. In The Red Road (Little, Brown, February 25, 2014), it's another gritty city story, this time with arms dealers and money launderers.

Another Brit who likes things dark is Mark Billingham––which is interesting when you consider his other career is stand-up comic. Number 9 in his Tom Thorne series, set in London, is From the Dead (Atlantic Monthly Press, January 7, 2014). Don't get tripped up on this one, though. It was first published in the UK way back in 2010 and there have been two later Tom Thorne books published in the US in the last two years. Don't you just hate the way US publications don't always follow the original publication order?

One of my (many) dirty little secrets is that I got tired of the writing team of Charles Todd's Ian Rutledge series three or four years ago. But I know that this series about a shell-shocked World War I veteran and his personal phantom is a real favorite with many mystery mavens, and it would be uncivil not to let them know to make room in their reading calendars for the 16th book in the series, Hunting Shadows (William Morrow, January 21, 2014). It's 1920, and Scotland Yard is called in after the second of two murders strikes the Fen Country around Cambridge. The first murder is the shocking gun shooting of a guest at a society wedding at Ely Cathedral, and the second is is the shooting of a lawyer standing for Parliament. Rutledge can't find a link between the two deaths, but when a third man is shot, he knows he must dig deeper.

I don't have enough fingers and toes to count the books in M. C. Beaton's Hamish Macbeth series. No matter. All you need to know is that another one is coming. It's called Death of a Policeman and it's coming on February 25, 2014 from Grand Central Publishing. When Macbeth's nemesis, Inspector Blair, sends a young officer named Cyril to compile a report on just what it is that Macbeth does all day in Lochdubh, Cyril ends up dead and Macbeth is suspect number one.

Speaking of prolific, how about Alexander McCall Smith? Check your calendar; it's been a few months since his last book, so you know another one is coming. This one is a nonseries book called The Forever Girl (Pantheon, February 11, 2014), a multi-generational love story set in the Caribbean.

Laura Lippman may be best known for her Tess Monaghan series, set in Baltimore, Maryland, but she's sure won a lot of awards for her nonseries books. She has a talent for poignant and/or portentous-sounding titles, and After I'm Gone (William Morrow, February 11, 2014) continues the tradition. The set-up sounds a teeny bit like the Judge Crater book: "an addictive story that explores how one man's disappearance echoes through the lives of the wife, mistress, and daughters he left behind." Early readers seem enthusiastic.

Tomorrow, just in case we haven't overburdened you this week, we'll give you a big list of other mysteries coming out this winter. Happy reading, and stay warm!