Review of Bee Ridgway's The River of No Return

The River of No Return by Bee Ridgway

Many crime fiction fans love books involving time travel and I'm no exception. This weekend I found time capable of manipulation in Bee Ridgway's debut, The River of No Return (Dutton, 2013). It's a mash-up of time travel, historical fiction, mystery and Regency romance that begins during the Battle of Salamanca in 1812.

Twenty-three-year-old Nicholas Falcott, Marquess of Blackdown, is about to be skewered by a French dragoon when suddenly the world goes black. The next thing he knows, he's waking up in a London hospital. The man at his bedside says, "You are in the care of the Guild. The year is 2003." Apparently, during moments of terrible stress, some people jump into the river of time. The man himself was a butcher in Aachen who leaped in 810 and landed in 1965. The Guild, organized by other time travelers, has strict rules: (1) There is no return, either in time or place. (2) No one must be told. (3) There is no breaking of the rules. After a year of living in the Guild's compound in Brazil to prepare for modern life, the Guild picked a new country for Nicholas and gave him money and property. Thus did the English marquess become Nick Davenant, owner of a cheese-producing farm in Vermont, with only his ancestral ring to remind him of home two centuries ago. Nick is mostly happy, although he's troubled by dreams and the recurrent thoughts of a beautiful brown-eyed girl. 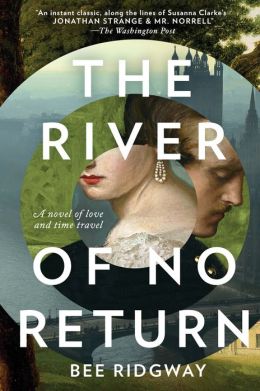 That beautiful brown-eyed girl is Julia Percy, who's back in 1815, grieving over the death of her grandfather, the Earl of Darchester. The heir to the title is her cousin, the hateful Eamon. Now, Eamon is at Castle Dar in Devon, making Julia's life miserable with his obsession about finding the talisman that enabled their grandfather to do some weird things with time. Julia was kept mostly in the dark about it, but her grandfather whispered, "Pretend" to her as he died, so Julia is trying to pretend she knows absolutely nothing.

There things stand, Nick pretty happy in Vermont in the 2000s and Julia completely unhappy in England in the 1800s, when Nick gets a summons from the Guild's Alderwoman, Alice Gracoki. A rival group of time jumpers, Ofan, may have screwed up the river of time and the world faces serious future danger. The Guild wants Nick to break the rules by returning to 1815 Devon. Nick will claim he's spent the past three years with amnesia in Spain. Because Nick has no experience time traveling, he will be accompanied by a Russian Guild official named Arkady. They'll be looking for the talisman and Ofan. After their mission is concluded, Arkady and Nick will return to the present. In the meantime, Nick will try to avoid drowning in time, which may be harder than Arkady and Nick think.

The England of 1815 is undergoing change, and writer Ridgway, a professor of English at Bryn Mawr, makes the most of the marquess's return to show how it affects his sisters' financial plans and their social status. Nick's fellow aristocratic land owners are trying to postpone the inevitable end to their current way of life. Factories in London and the promise of a new life in America are enticing the lower classes off the old English estates. The Corn Bill is coming up for a vote in the House of Lords. Nick––who has seen England's future––and Arkady have quite a time in London and Devon.

Although, at times, dialog stalls the plot's action in this 450-page book, it's an excellent debut, especially for readers who love a good Regency romance. Nick is a sweetie and a hottie and Julia is feisty, and Ridgway has a deft hand with romantic scenes. She also has interesting takes on the hows and whys of time travel. Good time-travel books must contain a unique way of initiating travel, whether it's the Doctor's 1960s-era London police box or Dorothy clicking her heels and chanting "There's no place like home," and I like the simple grab hands and jump approach of The River of No Return. The ending is satisfying, but it leaves the door open for sequels. That makes me happy. It might be time for a jump to get your hands on it for a read over the winter holidays.
Posted by Della Streetwise at 12:35 PM