Review of Christopher Moore's The Serpent of Venice The Serpent of Venice by Christopher Moore

I never know quite what to expect from author Christopher Moore, but this quirky laugh-out-loud farce is typical of his irreverent oeuvre. The Serpent of Venice is a bawdy mash-up of two of Shakespeare's plays, The Merchant of Venice and The Tragedy of Othello, with a dash of Edgar Allan Poe and an infatuated sea serpent thrown into the mix.

This is the second appearance of our protagonist, Pocket the Fool (after Fool: A Novel), with the puppet Jones and his trusty sidekicks, Drool and Jeff the Monkey. Pocket has been sent to Venice by his wife, Cordelia, the more-or-less accidental queen of England, to persuade the Doge not to go to war with Turkey. While he is there, Cordelia dies in London, presumably of disease, leaving Pocket in a very sticky situation.

A triumvirate of powerful men in Venice wants Pocket dead, by any means possible. The Doge favors Pocket, whose interests are inimical to their greedy plans, and Pocket has boasted of seducing Portia, the Senator's second daughter (his first had run away with that Moor, Othello.) Senator Montressor Brabantio, Iago the soldier, and Antonio the merchant lure Pocket to the Brabantio's house with the promise of a new cask of Amontillado wine to taste. The other two conspirators help Brabantio chain Pocket in the dungeon and leave. The Senator uses long-forgotten skills to brick up the entrance, jeering all the while that Cordelia had been slowly poisoned by his hawkish cabal. 'Walling you up in the dungeon.'

Anyone familiar with Poe's creepy story The Cask of Amontillado will surely remember that despairing cry. 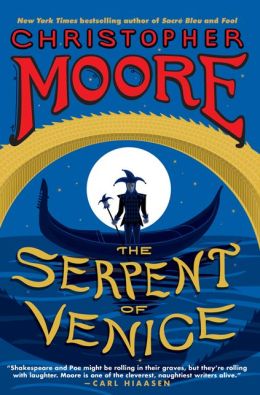 After several days in the dark dungeon, a female sea serpent/mermaid not averse to intimate inter-species relations begins to visit Pocket, mauling him lovingly and bringing him dead fish to eat. The smitten serpent finally pulls his chains out of the wall and deposits Pocket in front of Shylock's house on the Jews' Isle. Shylock's daughter Jessica has always wanted a slave, but Jewish law forbids it. Pocket narrowly escapes a bris at her inexperienced hands, but agrees to become Shylock's uncircumcised employee.

The Immortal Bard himself was a master of innuendo and double entendre, and his work is full of sexy puns. Did you know that any passage that contains both a lady and a glove is likely a reference to sex? Both gloves and condoms of the period were made of lambskin. Almost any cut of meat mentioned in Shakespeare has a double meaning; haunches, rumps, loins, sausages. Fruit too, especially pears. Elizabethan audiences loved their raunchy humor and Shakespeare loved to give it to them. There is much ado about codpieces in this book; sometimes it was more reminiscent of a sophomore boys' locker room than anything else. I had never really thought about codpieces being sized, but Pocket is presented––at least by himself––as the smallest man with the biggest codpiece in most gatherings.

Moore's one-man invasion of classical literature managed to confuse me about the characters thoroughly––it has been many years since I read or saw either of these plays performed. Portia, a character from Merchant, appears here as the younger sister of Desdemona, who was married to Othello. When their father, Senator Brabantio, dies of a heart attack after walling Pocket in the dungeon, Othello the Moor, as husband of Desdemona, inherits by default his seat on the powerful Council. There is a Chorus, which at one point argues with Pocket. While I appreciate Moore's modifications of the outcomes for Othello, Desdemona, and Shylock, I'll have to reread synopses of both plays to get the characters and stories straight again. And the puppet Jones has all the best lines!

Note: I was given a free review copy of The Serpent of Venice, which will be published by William Morrow on April 22, 2014.
Posted by Periphera at 4:00 AM