Review of Robert Harris's An Officer and a Spy An Officer and a Spy by Robert Harris

I knew the basics of the Dreyfus Affair, but what I didn't know is that the most interesting parts of the story happen when Captain Albert Dreyfus is offstage. First off, I should say that although An Officer and a Spy (Knopf, January 2014) is classified as fiction, author Robert Harris tells us that his goal is to use the techniques of a novel to retell the true story of the Dreyfus Affair. The characters and the events are real.

The central figure in this dramatic story is Colonel Georges Picquart. As someone who had become acquainted with Dreyfus some years earlier, when Dreyfus was a young officer training at the military college where Picquart taught, Picquart was present at Dreyfus's October 1894 arrest by the army on charges of passing secret military information to German agents. Picquart had no trouble believing in Dreyfus's guilt, in part because Picquart was an anti-Semite, as most soldiers were, unfortunately.

Dreyfus was convicted a few months later and sentenced to life imprisonment in terrible conditions on Devil's Island, 8,000 miles from France. He left behind a young wife, two small children and other family members who were determined to use the family's considerable wealth to exonerate Dreyfus.

None of this was of any particular interest to Picquart, until he was assigned, shortly after Dreyfus's conviction, to become the chief of the military's secret intelligence bureau, called the "Statistical Section." Almost by accident, Picquart soon discovered that the evidence against Dreyfus was almost nonexistent, but that there was good evidence that the real traitor was a womanizer, gambler and cheat, Major Walsin Esterhazy.

This is the set-up to what becomes a story that would be too unbelievable as an original piece of fiction. But it's only too plausible today, when we've become jaded by seeing how, all over the world, political, military, religious forces and their associates often place their own institutional interests above quaint concepts like truth, honor and justice. Dreyfus, Picquart and other individuals were just pawns in a chess game for the various institutions' visions of the future of France and its military. But chess game is putting it too politely. This was a game of double-dealing, dirty tricks, and possibly even murder.

The late 19th century was a time of ferment in France. The French Republic was in its infancy and besieged by monarchists, the Catholic Church and the military on one side, and socialists and anti-clericalists on the other. The Army, having suffered a humiliating defeat at the hands of Germany in the Franco-Prussian War of 1870/71, was rigid, hidebound and reactionary. The warring sides seized on the Dreyfus Affair to carry their messages, inciting a press war, whipping up the populace to riotous demonstrations and bringing the country to the brink of civil war.

Robert Harris, probably best known for his masterful novel of alternate history, Fatherland, has brought history vividly to life here. He slowly and deliberately establishes his story, but by about halfway through, events are rolling forward like a steam engine at peak running speed. Even if you already know exactly how the historical events unfolded, I think you'll find it as hard as I did to put the book down.

Harris's character portrait of Picquart paints him as more attractive than he probably was in real life. Harris doesn't make him an out-and-out hero, but he underplays Picquart's anti-Semitism as much as possible. He emphasizes that Picquart is an anti-clerical. I'm not at all sure there is much evidence for Picquart's anti-clericalism, but it helps illustrate the larger forces at work behind the Dreyfus case. And, although we don't get inside Picquart's heart and mind deeply, Harris so well describes the effect of him on the endless inquiries, trials and re-trials: "I am the founder of the school of Dreyfus studies: its leading scholar, its star professor--there is nothing I can be asked about my specialist field that I do not know: every letter and telegram, every personality, every forgery, every lie." 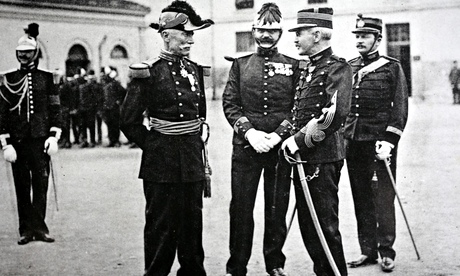 I wish Harris could have worked in more detail about the political ferment behind the events described in the book, but I recognize what a challenge that would have been. Despite not having that stronger historical foundation, and some possible oversimplification of the characters, this was a completely riveting read. It's the kind of book that will stay in my mind for hours or days to come.
Posted by Sister Mary Murderous at 4:00 AM