If you're reading this, we don't have to tell you that the mystery genre has been a hit from the beginning and seems to gain in popularity all the time. There's a lot of theorizing out there about why mysteries are so popular. Most of the theories are pretty high-falutin' stuff. The real reason might be simpler; like that book mysteries are so much better than the many other mysteries we have to deal with every day.

Georgette Spelvin: I'll go along with this reasoning, because the last time I tried to invoke Freud and Jung to explain why mystery reading is so addicting, you asked me what I'd been smoking, Sister. 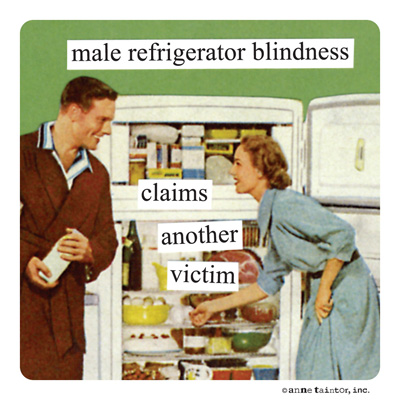 Sister Mary Murderous: In real life, men are mysterious to women and women are mysterious to men. But on a day-to-day basis, the man/woman mysteries can be pretty pedestrian. Like: Why can't my husband find anything in the refrigerator or figure out where half the stuff goes when we unload the dishwasher? To be fair, I should talk about the things he finds inexplicable about me. But, hey, it's my blog and who says I have to be fair?

Georgette Spelvin: Not I. Life isn't fair. Just read any book of crime fiction to discover an innocent decision that leads to Big Trouble. Simply renting a place to live is disastrous in Ruth Rendell's A Demon in My View and Mary Roberts Rinehart's The Circular Staircase. The decision to eat a chocolate brings death in Anthony Berkeley's The Poisoned Chocolates Case. I guess you could call this a sweet mystery of death.

Maltese Condor: Ah, sweet mystery of life! I believe, according to Bing Crosby in the song of the same name, the main mystery is falling in love. Carl Sandburg, who wrote, in his poem, Explanations of Love, "There is a pair of shoes love wears and the coming is a mystery" would agree with Bing. Your mysteries are more tangible, Sister.

Sister Mary Murderous: If you're a parent, you know all about cracking alibis, following a trail and ultimately solving the crime. But, let's face it, the kids aren't exactly criminal masterminds, so breaking their alibis doesn't take a super-sleuth. Following a trail isn't too tough either, since it's usually made up of mucky footmarks and sticky fingerprints. The only real challenge is subjecting the convicted culprit to a punishment that (a) is inventive, (b) is effective, and (c) isn't so inventive and effective that child protective services gets involved.

Maltese Condor: Peter Robinson's Close To Home tells the story of the deaths of two 15-year-old boys, decades apart. The cases would have been much easier to solve if the water hadn't been muddied by the fact that at least in one case, other boys––rascals and scamps, the bunch of them––hadn't felt that there were some things they couldn't tell their parents, such as playing hooky and problems with dirty old men. One of the scamps, Alan Banks, learned the value of the truth in his later years as a CID Inspector. Frankly, some parents tend to down-pedal much of what of their offspring tell them about their activities.

Georgette Spelvin: Yes, some parents are guilty of doing that. Then there are some parents who usher their kids into criminal behavior. We all remember Mario Puzo's The Godfather. Maybe you haven't read the hilarious "coming-of-legal-incarceration-age" story narrated by Luke Fulmer in Dallas Hudgens's Drive Like Hell, in which the 10-year-old Luke meets his dad Lyndell for the first time when he shows up in Luke's bedroom in the middle of the night. A few hours later, Luke is crawling through the doggie door of an auto supplies store to steal a distributor cap and an oil filter at Lyndell's request and driving the car while Lyndell rides shotgun "with a Kool snagged in his teeth and a pint of Motlow between his legs." I wasn't raised in the South by redneck parents like Luke, but I felt I was tagging along with Luke while I read this fabulous book.

Della Streetwise: Here's another guy who was born to bend the law. Nick Harkaway's Joe Spork is the son of a London gangster and holds down a job as an antique clocks restorer. While working on a decades-old mechanism for an old intelligence agent, he activates a doomsday device from the Cold War days. This sets off a race to nab it by individuals and organizations of all stripes. Joe decides not to cower behind the aspidistra. It's no mystery that Harkaway is John le Carré's son. His brand-new book, Angelmaker, is an exhilarating and funny chase between many spies and I loved it.

Currently I'm reading Fannie Flagg's Standing in the Rainbow. Thanks for the intro to this author, Sister MM. How I got along without reading her is a mystery to me.

Sister Mary Murderous: While your book sleuth is out and about, interviewing witnesses and suspects, we're at home, pursuing our own mysteries. Instead of a missing-persons case, we're tracking down the ever-elusive socks that disappear from the laundry. For those of us over 40, we're in hot pursuit of our reading glasses. (Hint: Try the top of your head.)

Maltese Condor: I am reminded of the series about the Peculiar Crimes Unit, featuring aging detectives John May and Arthur Bryant, who won't hang up their hats. They can find solutions to the most complex puzzling crimes, but one of them (I can't remember which!) can't ever find his glasses. 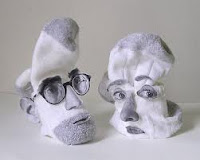 As far as I know, the mystery of the lost socks has been solved. Jerry Seinfeld has revealed that these are not losses but, rather, well-coordinated escapes, planned while in the paired state. Many a sock marriage has gone down the tubes and I won't go into incompatibility, because that is a sock of a different stripe.
Georgette Spelvin: My family members could mystify competitively. I mean, how can a kid's usual good sense develop the hiccups, allowing initials to be carved into the door of a brand-new car, or a twig to be employed as a pick-lock to completely jam a locked front door? But it's inanimate objects that really make me shake my head. How is it that inanimate objects sniff out occasions when you're vulnerable? Like:

Sister Mary Murderous: On the home front, we use forensic investigation techniques, but they involve things like trying to figure out what's in that Tupperware bowl under the green fuzz, whether that smell means the leftover Chinese food is no good anymore or if that shirt can be worn again before it's laundered. Periphera: What is that disturbing sticky crud that forms on the bottom of dining tables? Lunching at a restaurant, I accidentally brushed the underside of a very clean-looking table and immediately had to go wash my hands. Came home and crawled around wiping furniture from the underside.

Sister Mary Murderous: And then there are puzzle mysteries. I love puzzle mysteries. The book has maps, a limited universe of suspects, timetables, alibis, witness statements and the like, and if you put your mind to it, you can actually figure whodunnit, how, where and when. But in real life, you just get to solve the puzzle of how you can get to work, run your errands, make your meetings and appointments and other obligations on time and still maybe have some time for yourself at the end of the day.

Maltese Condor: Parnell Hall has a bunch of mysteries relating to actual puzzles. He's also well-known for his YouTube musical diatribe about the mysteries of the publishing world.

Crosswords are supposed to make you smarter and ward off Alzheimer's disease, but sudoku puzzles just make me feel like an idiot who still has problems with the numbers one to nine.

Sister Mary Murderous: Another problem with the mysteries of life is that unlike books, there is no solution. There is no point even pursuing questions like:*

* Not that any of these questions are ones I've ever pondered personally!

Maltese Condor: I can sympathize with anyone who wants to clean up before the cleaners come in, because they might have house cleaner like sharp-eyed Lily Bard, from Charlaine Harris's series in the not-so-sleepy little town of Shakespeare, Arkansas.

Or how about sharp-tongued Blanche White, from Barbara Neely's excellent series about a middle-aged domestic worker? Blanche is a women who's had bad times and, in Blanche On the Lam, we find her under suspicion for murder. Fortunately, she's in a great position to ferret out the clues she needs to find the true culprit.

Georgette Spelvin: MC, your talk about being in a great position for ferreting out clues reminds me of Ray Milland in The Big Clock, a noir movie based on the 1946 book by Kenneth Fearing. Or how about James Stewart in Alfred Hitchcock's Rear Window? In that movie, Stewart is confined to a wheelchair, and he's in a uniquely good position for spying on his neighbors. The first time I saw it, it scared the daylights out of me because Raymond Burr is so darned creepy. Watching it still makes getting to sleep later a mysterious process.

Sister, we're making a rule that there's to be no more mention of the Kardashians on Read Me Deadly Ever Again.

The Material Witnesses: Got any imponderable mysteries of life to lay on us?
Posted by Sister Mary Murderous at 4:00 AM