I Spy a Sleeping Spy

Last week my good friend Sister Mary Murderous reviewed Olen Steinhauer's An American Spy. I was in the mood for espionage, but the mental picture of spies chasing through the snow in Prague or standing on a dark cold street in Helsinki made me pause and shiver. How much nicer for a spy to hibernate during the winter and to awaken in the spring when it is warmer.

Hibernation may be pleasant for the spy, but it presents the spy's master with obvious potential problems. The goal is for the spy to be comfortable sleeping in enemy territory while disarming the enemy's suspicions, yet the spy shouldn't be so comfortable s/he will refuse to be awakened. The spymaster in Donald E. Westlake's Money for Nothing gets around this problem in an ingenious way. His sleeping spy doesn't realize he's been asleep, or even a spy, until he's told to wake up.

Here's how it happens. Josh Redmont receives a mysterious check for $1,000 from United States Agent. Redmont is a fairly honest guy. He tries to trace the check but he doesn't get anywhere and he could use the money. Whoever United States Agent is, the check is good so Redmont cashes it––then the one he gets the next month, and the next month after that. The checks keep coming for seven years and Redmont keeps cashing them.

Then one day, a stranger introduces himself as United States Agent and tells Redmont that he's active. The threatened safety of Redmont's wife and child will insure Redmont's cooperation in an assassination scheme that is somewhere between a Westlake comic caper and a hard-boiled Westlake-writing-as-Richard-Stark plot. The book's indeterminate nature keeps it from being top-of-the-line Westlake, but it's still an entertaining book about a man who unexpectedly proves to be a more enterprising agent than his spymaster dreamed possible. 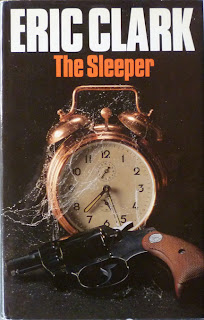 Eric Clark's The Sleeper is more serious, ironic and suspenseful than Westlake's book. It invites discussion about gray areas of morality. Clark's protagonist is James Fenn, a young British journalist who is a communist sympathizer like his father. Fenn thinks he knows what he's letting himself in for when he walks out of Hungary in 1956 with a rescued baby strapped to his chest. The escape from Hungary is planned because Fenn is to be Russia's sleeping spy in England. The baby is a "welcome bonus" who is adopted by Joseph Banks, a very rich English academic, and his Hungarian-born wife.

It's now more than 20 years later, in the 1980s. Fenn no longer works on Fleet Street. He, his wife and two young daughters have moved to Malta, where they live simply but happily. Fenn isn't much of a Marxist anymore.

Richard Stanley Godwin, former Defence Minister, has just been elected British prime minister. In West Germany, the CIA has been questioning Vitali Suslov, but the Americans can't decide whether he's a genuine defector or a KGB plant. Based on what Suslov says, someone in England has passed secret information to the Russians. The CIA suspects Godwin's good friend and adviser, Sir Joseph Banks.

The CIA insists that the British investigate Banks, but there's a big problem. Several years earlier, British Intelligence tried to investigate Banks and when Defence Minister Godwin got wind of it, he was outraged and put a stop to it. Now, the investigation will have to be done without Prime Minister Godwin's knowledge. An elaborate plan is devised that involves Fenn, the journalist with a special connection to Banks through Banks's adopted daughter. The British know Fenn is a never-awakened Soviet spy, so a British agent named Mallahide will pretend to be the Russian spymaster who tells Fenn it is time to wake up.

The ensuing scheme involving the manipulation of Fenn and the targeting of Banks is more complex than it needs to be. This makes it less believable, but its complexity makes it noteworthy and worthy of Machiavelli. As the screw comes down hard, the plot twists and turns and the tension mounts to the almost unbearable point. Mallahide pops more and more aspirin and Fenn sleeps less and less until the book's conclusion, when the reader can finally put the book down and sleep. That is, unless the reader needs another book with a sleeping spy, such as the following: William Safire's Sleeper Spy features a Russian spy who has earned a fortune in the U.S. through his investment of Russian money. The Russians have forgotten exactly who he is, but they––and the Americans––want to hunt him down. There is a race to identify an Oxford-educated IRA sleeper agent in former Director General of MI5 Stella Rimington's thriller, Secret Asset. Michael Gilbert's Into Battle is set on the eve of World War I, while Daniel Silva's The Unlikely Spy is set in World War II. In Manning Coles' second Tommy Hambledon book, A Toast to Tomorrow, a man with amnesia is released from the hospital and becomes an important person in the Nazi party before he remembers that he's a British spy. Now that's what I call hibernation!
Posted by Della Streetwise at 11:30 AM