A series of 10 exquisite sculptures by an anonymous artist in paper began appearing at various cultural sites in Edinburgh, Scotland in the early spring of 2011.
The still-unidentified sculptor apparently also has a typically dry Scottish sense of humor. This wonderful visual pun appeared mysteriously at the National Library of Scotland. It was lovingly carved from a copy of Scottish mystery author Ian Rankin's final Inspector Rebus novel, Exit Music. The attached note says, "In support of libraries, books, words, ideas...(& against their exit.)"
Obviously the artist, along with many readers around the world, mourns the death of Rankin's long-running series. The artist had yet another trick to tweak Rankin's nose a bit. This sculpture, which appeared in an Edinburgh art movie house, depicts warriors racing and galloping out of a movie screen into the theater. If you look very closely, you can see that one of the audience members in this piece has the face of the author, quaffing a glass of Deuchar's Caledonian ale. (I had to take the BBC's word about the Deuchars label pasted on the glass, but that's Rankin, right enough.) The author, while flattered and amused, emphatically denies any knowledge of the artist or her work.

Despite international interest and curiosity, the Edinburgh artist remains unknown. The note left with her last sculpture reads:

"'You need to know when to end a story', she thought. 'Often a good story ends where it begins. This would mean a return to the Poetry Library. The very place where she had left the first of the ten. So here she will end this story, in a special place... A Poetry Library...where they are well used to 'anon.' Cheers, Edinburgh, it's been fun."

We may never know the name of this gifted artist, but her work set me searching for others who add the dimension of sculpture to paper books. There are a surprising number of them.

Artist Guy Laramee carves books into fantastically detailed landscapes, as illustrated in his mysterious carving of the abandoned desert city of Petra.

"The erosion of cultures––and of “culture” as a whole––is the theme that runs through the last 25 years of my artistic practice. Cultures emerge, become obsolete, and are replaced by new ones. With the vanishing of cultures, some people are displaced and destroyed. We are currently told that the paper book is bound to die. The library, as a place, is finished. One might ask so what? Do we really believe that “new technologies” will change anything concerning our existential dilemma, our human condition?" 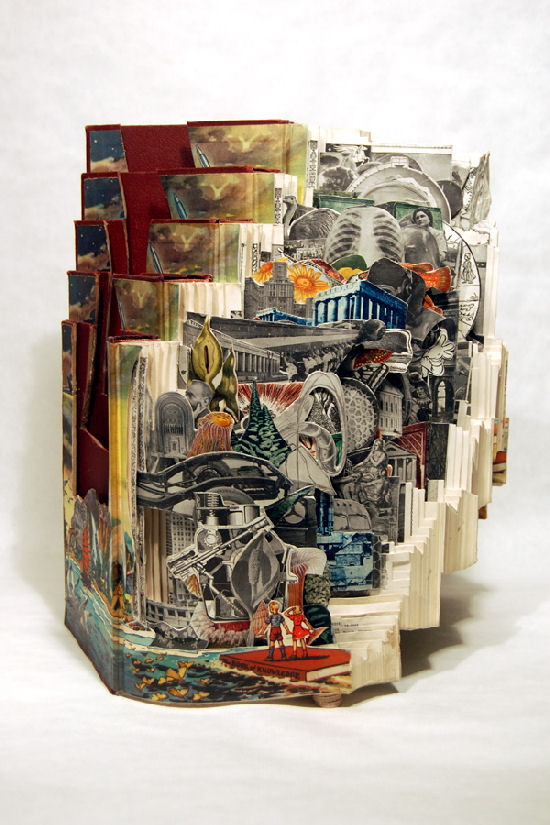 Brian Dettmer carefully matches his artwork to the subject matter of the books he carves:

"In this work I begin with an existing book and seal its edges, creating an enclosed vessel full of unearthed potential. I cut into the surface of the book and dissect through it from the front. I work with knives, tweezers and surgical tools to carve one page at a time, exposing each layer while cutting around ideas and images of interest. Nothing inside the books is relocated or implanted, only removed. Images and ideas are revealed to expose alternate histories and memories. My work is a collaboration with the existing material and its past creators and the completed pieces expose new relationships of the book's internal elements exactly where they have been since their original conception."

What an appropriate and lovely thing to do with an old set of encyclopedias! Can you see Dick and Jane at the foot of the stairs? The battered but profusely illustrated encyclopedias that kept me amused on childhood rainy days often seemed just that exciting.
Su Blackwell is a UK artist who works in both paper and fabric. Of her delicate Book and Light sculptures she says:

"I always read the book first, at least once or twice, and then I begin to create the work; cutting out, adding details. The detail is what brings it all together, the magic element. It is a tediously slow process. I often work within the realm of fairy-tales and folk-lore. I began making a series of book-sculpture, cutting-out images from old books to create three-dimensional dioramas, and displaying them inside wooden boxes.

For the cut-out illustrations, I tend to lean towards young-girl characters, placing them in haunting, fragile settings, expressing the vulnerability of childhood, while also conveying a sense of childhood anxiety and wonder. There is a quiet melancholy in the work, depicted in the material used, and choice of subtle colour."

"Paper has been used for communication since its invention; either between humans or in an attempt to communicate with the spirit world. I employ this delicate, accessible medium and use irreversible, destructive processes to reflect on the precariousness of the world we inhabit and the fragility of our life, dreams and ambitions."

So will paper books ever really die? I certainly hope not. The destruction of any book makes me cringe, but like Dettmer, I love the concept of a book as an "enclosed vessel full of unearthed potential." If an artist sees that potential differently than I do, and can coax his unique vision from it for the world to share, it has served its purpose twice. While electronic and audible books are wonderfully convenient, they obviously can't, as paper does, provide both inspiration and raw material for this breathtaking and doubly meaningful art form.
Posted by Periphera at 4:00 AM