How Would You Write a Mystery? 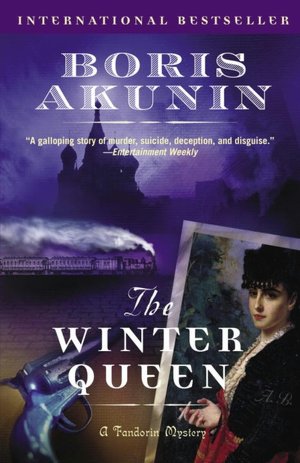 I am participating in a lively online discussion of author Boris Akunin's The Winter Queen. The first in a series of 16 books featuring his protagonist, Erast Fandorin, it is a runaway international best seller set in late 19th-century Czarist Russia. It is a very unusual book, a slyly sarcastic melodrama with cliffhangers at the end of every chapter. You can all but hear the pianist pounding out the danger music as a silent movie unrolls.

I was at a loss to imagine what would persuade a contemporary respected critic and essayist to write such a fantastically unlikely book, until a poster pointed out a fascinating interview with the author in The San Diego Reader.


Interviewer: "Can you describe the '90s––when Russia experienced mass culture for the first time and everything was lawless and open?"
Akunin: "Speaking about the book market, in the first wave the translations were of American hardcore crime fiction and all those books for housewives. This sort of down-market, commercial reading... Then the second wave was when our Russian authors started to write by themselves, and it was even worse. Because they were not professional. They thought the more blood, the more sex, the better. So it went in waves, one after another. The third one started with Alexandra Marinina, which was a decent wave of a decent level. Intelligentsia started to read it and enjoy it––a psychological detective, without all that filth."

Akunin has said elsewhere that his wife is an avid reader of mystery novels, but was so embarrassed by the poor quality and inflammatory cover art that she wrapped them in brown paper covers (as some readers of erotica do here). Akunin studied what was available in the genre and decided that he could do better. He then set about the task in a methodical way, very different to how I imagine most novelists proceed.

"Why sixteen books in the Fandorin series?"

The Winter Queen is Akunin's Conspiracy subgenre novel. He has obligingly provided a table listing each book in the series and the subgenre it represents here. We went back and forth on the forum about what the 16 character types might be. I think this list of character types would be most useful to a first-time novelist. All but the last two novels have now been translated into English, so playing "spot the characters" might be fun.
But isn't this a bizarre way to write a novel? Like a Chinese menu: select story type A from here and major character B from there, blend well, add some snarky humor and voila! Don't authors sweat and strain over their novels, putting in a huge emotional investment that leaves many of them very sensitive to criticism? What does Akunin say?

Interviewer: "You have said that you don't write from the heart. That you don't have a serious literary soul. That you write with your brain only. What do you mean?"
Akunin: "I mean that I am not an exhibitionist."


"Actually, the only writer, really big writer, who is not an exhibitionist is Nabokov. And still I am not sure of that. Myself, I do not want to talk about my inner problems. My readers have enough problems of their own. I want them to forget their problems. I do not write for myself, like a real writer would. I write for an audience. And if I don't have readers, then I won't write. I have a lot of friends who are real writers and actually they do not care. They want their books to sell, but if no one bought their books, they would continue writing."

There you have it. A methodical, almost scientific approach to the art of writing a best-selling mystery novel. Of course it doesn't hurt if you are also fluent and well-read in several languages, have a subtle but wicked sense of humor, and want to spare your spouse the embarrassment of reading books in plain brown wrappers.

Given the author's tables of mystery and character types, what mystery would you write?
Posted by Periphera at 4:00 AM