Summer is almost officially here, and in south-central Pennsylvania the Muggies that dominate much of the season are beginning to make their presence known. Time to slow down and spend time in the shade reading, sipping iced tea, and watching the wildlife. The books that appeal now are lighter, not as serious as wintertime fireside reading. We are still unpacking from our move, but that desperate "I can't find anything!" edge is off, and I have almost figured out how to work the kitchen appliances, all much newer than the ones I left. 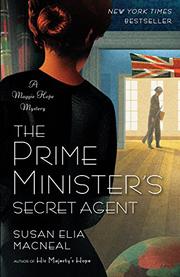 The Prime Minister's Secret Agent: A Maggie Hope Mystery by Susan Elia MacNeal (Bantam, July 1, 2014). For an American girl, Maggie Hope has had some remarkable adventures in Britain and Europe during World War II. This fourth in the series takes place in the fall of 1941, leading up to the bombing of Pearl Harbor. Maggie, still recovering from injuries sustained during her foray behind enemy lines, is teaching survival skills to aspiring spies at a compound in Scotland. When a dead sheep with black pustules washes up on the beach and several dancers, including Maggie's friend Sarah, become gravely ill with the same symptoms, Maggie suspects something horrible.

While Sister MM might correct me here, most of the history in these books seems accurate to my rather sketchy knowledge of the period. Neither Roosevelt nor Churchill come off too well in this book, which seems to have offended some early reviewers. There were several war-related subplots in this one and the series is getting progressively darker, but it retains enough of the Nancy-Drew-goes-to-war flavor to keep me engaged.

The Dead Will Tell, by Linda Castillo (Minotaur Books, July 8, 2014), is the sixth in the series featuring Kate Burkholder, Chief of Police in the small Ohio town of Painter's Mill. Both Kate and her lover, John Tomasetti of the State Police, keep being reminded of horrible incidents in their pasts that they would prefer to forget. This re-emergence of past crimes forms a recurring theme throughout the series, and this book is no exception.

In 1979, the Hochstetler house was burned down. The bodies of the father and his children were found. Willis had been shot, and all but one of his four children burned to death. His wife had apparently been kidnapped, and no trace of her was ever found. No one was ever brought to trial for the crimes. Now, brutal murders are being committed in Painter's Grove, with an Amish doll left in the mouth of each victim, apparently as retribution for the earlier unsolved murders. Kate's Amish upbringing provides some access (even though she is shunned for leaving) to the closed community. Castillo's well-written books feature violent and passionate crimes set against the backdrop of the placid and productive Amish farm country, where nothing is ever forgotten or wasted.

Two Soldiers by Anders Roslund and Börge Hellström (trans. from the Swedish by Kari Dickson; Quercus, June 10, 2014). I usually avoid Nordic mysteries; they are generally too bleak and gritty for my comfort. Roslund and Hellström's first book to be available in the US, Three Seconds, was a notable exception. The authors managed to deliver some scathing social commentary within a harrowing and very readable tale. It took my breath away, and I am hoping Two Soldiers can do the same.

The setting here is a suburban slum of Stockholm, where a pair of teenage boys who began by selling drugs, successfully build a drug empire notorious for its viciousness. When one of the boys is imprisoned, they plan a jail break and crime that will put them in the pantheon of master criminals. Many reviewers have mentioned that the book is depressing––most of this series' books are, but the authors are passionate and honest about the underbelly of the situations they expose. I find their books readable and compelling, if somewhat horrifying. You would never suspect that this innocuous-looking group is deeply steeped in gruesome crime, but The Medieval Murderers has become one of the more popular speaking groups in Britain. Seven authors of medieval mysteries formed a group whose members are available for speaking tours around the country, discussing the Middle Ages, writing, and their books, often quite humorously. Somewhere along the line, they decided to collaborate on a series of books around a theme. This joint effort has led to often bewilderingly-timed releases of the books. The False Virgin, released June 5, is set in 848 A.D., while The Deadliest Sin (The Medieval Murderers, No. 10) (Simon & Schuster UK, July 3, 2014) is set during the spread of the Black Plague in 1348. It seems to be loosely based on Chaucer's Canterbury Tales, with a group of penitent pilgrims at an inn each telling his story of crime and murder. I have been unable to find a single early review of this book, so can only pick out bits from the publisher's blurb. The only other collaborative series I have read was the popular science fiction/fantasy Sanctuary series many years ago. I enjoyed most of them, so will look forward to trying this approach in period mysteries. 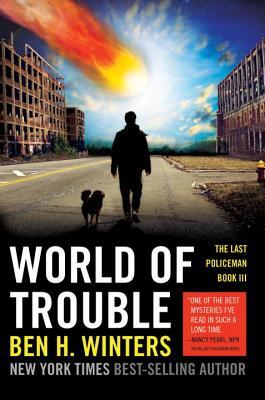 World of Trouble: The Last Policeman Book III by Ben H. Winters (Quirk Books, July 15, 2014). I was quite anxious to get my hands on this last tale in the trilogy that began with the author's Edgar-winning The Last Policeman. We are now less than a month away from the inevitable collision with the asteroid Maia, expected to wipe all life from the earth. Detective Hank Palace has traveled to an Amish (really?) community in Ohio in search of his only living relative, his sister Nico. Civilization has mostly fallen apart, but Nico had left to join a group that had a plan to divert the asteroid. What the author will do has been a source of speculation for followers of the series; will he wimp out with some miraculous or scientific solution, or bravely ride this thing into the ground? I have an advance copy in hand that I haven't had time to open yet. (Aaargh!) Guess I'd better hurry.

Note: I received an advance review copy of Susan Elia MacNeal's The Prime Minister's Secret Agent.
Posted by Periphera at 4:00 AM