Camp Out with These Books

Conveniently for my daughter, she's rarely home when I want to throttle her. I'm getting ready for a camping trip with friends, so I pulled out our five-person tent. Except it's not our five-person tent. I've never seen this tent before in my life. The last time I saw our tent is when I handed it to my daughter, who took it to a weekend music festival, the kind where there are thousands of tents being taken down on the last day, and your daughter brings back a tent that's not nearly as large or as nice as the one she and her friends originally set off with in her car.

That particular tent may be jinxed. On the way home after purchasing it, I asked my two then-small kids not to tell their dad how expensive it was. It was erected in the living room, and the three of us were looking at it proudly when Hubby/Daddy got home. "Wow, that's a really nice tent. I bet it was pricey, like a hundred bucks," he said. "Yeah, something like that," I smiled. "No, Mommy, it was $xxx.xx," advised our daughter, the overly truthful, little Miss Know-It-All. "Hey, Mommy told us not to tell Daddy how much it cost," scolded her big brother, who liked nothing more than correcting her. Luckily, Hubby/Daddy has a sense of humor, and he just laughed.

Thinking about our jinxed tent today, I hope the people now camping with it are not plagued by blizzards or high winds, since the tent's bad-weather cover remains in our garage. The instructions are there, too. Let me know if you're the (un)lucky person in possession of the tent that formerly belonged to us, and I'll tell you how to set it up. For everyone else, I'll stick to suggesting books you'd be lucky to have for reading in your tent.

After you've doused yourself with mosquito repellent, pitched camp away from the poison oak, and secured your food out of the bears' reach, take refuge in the mean streets of Los Angeles with black homicide detective Elouise ("Lou") Norton in Rachel Howzell Hall's Land of Shadows (Forge, June 2014). Lou's current case involves the death of 17-year-old Monique Darson in a gentrifying development, but Lou sees similarities to her own older sister Tori's unsolved disappearance 25 years earlier. As her investigation proceeds and grows more dangerous, Lou becomes convinced that solving Monique's murder will also close Tori's cold case. Her superiors aren't so sure.

Most of the book is narrated by Lou. It's a pleasure to follow Lou as she recalls days leading up to Tori's vanishing and its aftermath, and she deals with her new partner from Colorado, Colin Taggert, who dresses like he's "going to a bar mitzvah at the Ponderosa" and does a bites-his-lip-and-smiles thing when he surveys the attractive Lou. Lou rolls her eyes, although her marriage to Greg, in Japan on business, is wilting. How many "Sorry, Baby" Porsche Cayenne SUVs does a woman want from her cheating husband? Lou is sassy, smart, and tough; writer Hall knows Los Angeles inside out, and she has keen insight into human nature and complex family relationships. This is a great start to a new series. Don't worry about the looming "Z" for Sue Grafton's Kinsey Millhone: meet the LAPD's Lou Norton. Okay, I love Lou, and I look forward to seeing more of her in the future, but one should spend only so much time with law enforcement while camping. After all, isn't the point of spending a few nights hanging out with wild animals in the forest to escape civilization? Let's plot a murder (ineptly, it's the funnest way) with Buddy Sandifer, a used-car dealer in the Midwest and father of a teenage son heavily into sex manuals, who wants his wife dead so he can marry his buxom blonde mistress, Laverne, in Sneaky People. This terrific black comic noir, set in the '30s, is written by Thomas Berger, who also wrote the picaresque novel, Little Big Man, which starred Dustin Hoffman when it was adapted for the screen. 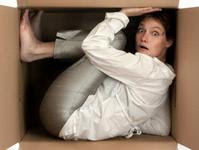 When you've had your fill of gazing at the stars and eating s'mores around the fire, light the tent lantern and crawl into your sleeping bag with a book. Now, the book must be absolutely riveting to keep your mind off how incredibly claustrophobic it all is. Think about it: you are lying not only inside a small tent, you are encased in a narrow bag. But don't think about it too much. If the enclosed space is getting to you, and you're in danger of bursting into shrieks and running amok through the camp, you might find it helpful to stuff cotton between each of your toes so they don't touch each other while you're in your sleeping bag. (I have no idea if this actually works because it just occurred to me; however, doesn't the theory behind this suggestion seem sound to you?)

My specific book recommendation depends on the phase of the moon. If there's a full moon, don't just howl at it––read Robert A. Heinlein's The Moon Is a Harsh Mistress. Please don't tell me you don't like science fiction. There are certain books even non-sci fi lovers should enjoy, and this is one of them. In it, indentured lunar colony members produce wheat for consumption on Earth. It's 2075 when some of them, aided by a computer named Mike, decide to stage a revolution.

The word "revolution" reminds me of the French (Happy Bastille Day!), which reminds me of Alexandre Dumas' The Count of Monte Cristo. (Trust me, I am working my way toward a point.) If there's not a full moon, but an inky sky glittering with constellations, I suggest you read Alfred Bester's darkly comic oddball tale, The Stars My Destination. You'll see the parallels to Dumas' 1844 adventure masterpiece as Gulliver ("Gully") Foyle, Mechanic's Mate 3rd Class and only man alive on the wrecked and marooned spaceship Nomad, vows revenge against the owners and crew of the Vorga, a passing space vessel that ignores his distress signals. It's a furious, obsessional murderous pursuit through time and space that should distract you from the confinement of your tent and sleeping bag. I would be grossly irresponsible if I didn't close with a post-apocalyptic horror thriller for your nighttime read. M. R. Carey's The Girl with All the Gifts (Orbit/Hachette, June 2014) is that––and an on-the-road (à la Cormac McCarthy's The Road) and coming-of-age novel, too. Its heroine is a 10-year-old named Melanie, whom Dr. Caldwell calls "our little genius." Melanie lives alone in her cell in a cellblock full of other children. There are no windows, and the children have no memories of any other existence. Five days a week, Sgt. Parks trains a gun on them while they seat themselves in wheelchairs, are strapped in, and are wheeled into a classroom for lessons. Melanie loves her teacher, Miss Justineau, and hopes when she grows up, she can move to Beacon, the closest city in that part of England. Soon thereafter, events take a turn that puts Melanie, Miss Justineau, Sgt. Parks, Pvt. Gallagher, and Dr. Caldwell on the road to Beacon. That's all I want to divulge about the plot and characters.

Despite its flaws (clichéd characters and plot elements and an over-long 403 pages), I enjoyed this book for its creepy atmosphere, intricate plotting, examination of our world and a dystopian future, the relationships between the characters, and the chance to see Melanie come into her own. Pandora, who opened a box and gave her gifts to the world, would have enjoyed it, too. When the owls start hooting, pull out Carey's novel, and dig in.

Happy camping and reading, everybody.
Posted by Georgette Spelvin at 4:00 AM