Review of When We Were Orphans by Kazuo Ishiguro

When We Were Orphans by Kazuo Ishiguro 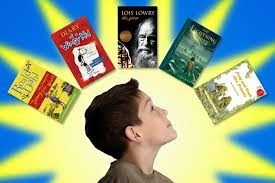 Once upon a time, part of the summer experience for high school kids was having to scroll through a long list of books and try to glean those 10 or so volumes that were not dry as dust and then get them read before Labor Day. Over the years, the lists have included more contemporary literature and, in many cases, the requirements are less onerous.

I read in the paper yesterday though that, as ever, everybody cannot be pleased. When the summer list of a local high school contained a book controversial because of the subject matter, and a minute fraction of the parents complained, the solution was simple. The school board just abolished the list completely and each student was to pick any one book he liked and read it. One book! Let's hope it's not written by Dr. Seuss. 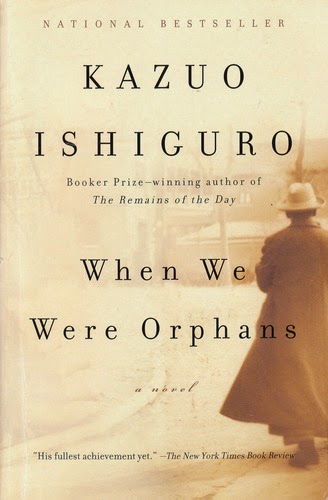 I am still a fan of lists, and they guide some of my reading to this day. One such list, The 50 Essential Mystery Novels that Everyone Should Read, caught my eye last week and, along with the classical favorites written by Agatha Christie, Conan Doyle and Wilkie Collins, I found When We Were Orphans by Kazuo Ishiguro (Knopf, 2000).

Having read and enjoyed The Remains of the Day and a few other Ishiguro novels, I was surprised to see a novel from this author that fit into the crime-writing genre. I couldn't wait to read it. Ishiguro always reminded me of Henry James, but I liked him better because I enjoyed what he had to say as much as the way he said it. 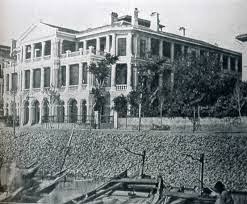 The story begins before 1920 in Shanghai, China. Christopher Banks is leading an idyllic childhood and spends most of his time in the international compound of a city in turmoil. This was during the time of the early rise of the Red Chinese party, which was trying to gain a foothold in an area where the Japanese and British concerns already had deep roots. Banks's father worked for a British company actively involved in the importation of Indian opium. 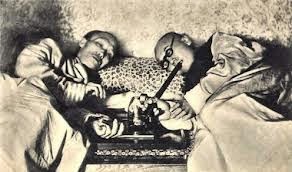 Ironically, Christopher's mother was active in trying to help stop the importation of the very addictive substance, which was eroding Chinese society from its heart. Christopher is oblivious to any turmoil at home, for the most part, and he plays happily with his closest friend Akiro, a Japanese boy, and other children who live nearby.

One day, his father simply disappears. While the authorities are doing their best to find him, his mother disappears as well. Christopher is sent back to England to stay with family, and there he grew up, went to Oxford and got on with his main ambition––which is to be a great detective.

This is what he manages to do in the spit-spot fashion recommended by Mary Poppins. All the details that the reader gets is that Banks solved this or that famous case and was becoming something of a celebrity in the society of London. I must say that excluding any details of his cases made his frequent patting himself on the back rather pointless. Once he feels affirmed in his notion that he is indeed a great destroyer of evil, he decides to return to Shanghai to discover the fate of his parents and solve the great mystery of his life.

It is at this point that Ishiguro begins the real purpose in this book. He subtly reveals his study into the inner working of an uncomfortable mind. 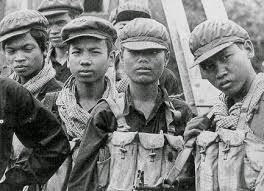 Christopher is a different person back in Shanghai, which is disorienting and unfamiliar now that the Japanese have invaded mainland China. He is arrogant, cruel at times, and maybe a bit tortured by the way his memories are not shared by the people he once knew. Up until now, Christopher has been presented as a clear-minded, logical man, in control most of the time. Here in Shanghai, he begins to disintegrate. Expecting to solve the problems of the China-Japan conflict, he is at least successful in some of his primary goals. 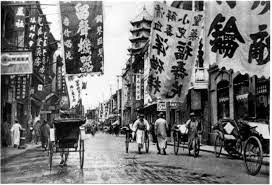 I had a difficult time, just as Christopher did, deciding what was real and what was a delusion. Memories of times long past are like that. Part of the problem is that Christopher was essentially a cold man who had had no close friends since childhood. Aside from a very manipulative woman in London who led him a merry dance, he was also pretty much asexual and avoided women. It was a chore to like this man. 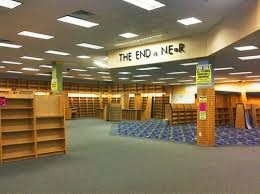 Why this book was on any list of mysteries is open to discussion. This detective story is more about investigating the investigator.

This doesn't change my belief that lists have a place in our lives, and they encourage knowledge of what's out there for readers in this age of vanishing bookstores. I have great fun perusing many of the lists of books at the Goodreads site categorized for one reason or another, including lists like the "worst book you will ever read," as well as "the most anticipated books of the year." A nice fillip is that the readers are continually working on these lists by voting for their own favorites.
Posted by Maltese Condor at 6:31 PM