Review of Ellen Feldman's The Unwitting

The Unwitting by Ellen Feldman

What I want most of all, when I open a book, is to get that feeling right away that the author is going to tell me a story; that in that first couple of pages I will be taken into someone else's world. Ellen Feldman does that here in her new book, The Unwitting (Spiegel & Grau, May 6, 2014). There is a real sense of immediacy in her writing, and she gives her protagonist a warm, sometimes waspish, but always compelling voice.

A Prologue begins the story on the morning of November 22, 1963, with freelance journalist Nell Benjamin in the Manhattan apartment she shares with her husband, Charlie, and their young daughter, Abby. Just seeing that date at the head of the chapter lends the book's title, The Unwitting, a certain ominous weightiness. We know, though Nell doesn't, that President John F. Kennedy will be assassinated later that day. What Nell also doesn't know is that Charlie will be killed that day as well; supposedly murdered by a mugger in Central Park in broad daylight.

We flash back to Nell and Charlie's meeting in the years after World War II, in which they both served.  Students on the GI Bill at Columbia University, they fall deliriously in love. Both are politically engaged leftists and both are anti-Stalinists. And that matters in the 1950s, for of course this is the Red Scare era in the US, and the early years of the decades-long Cold War between the Soviet Union and the United States.

Charlie, most of whose extended family were killed in the Holocaust, feels a keen sense of patriotic obligation to the US, and he is enthusiastic about being offered the editorship at Compass. Compass is a (fictional) literary journal with a liberal, but anti-Soviet, take on issues, and is backed by the moneyed Davenport Foundation.  This is an opportunity for Charlie to take part in the cultural Cold War that was also raging between east and west.

In addition to battling over politics and economics, the US and USSR struggled for cultural supremacy, with literature, theater, art, dance and music as ammunition. The Soviets trotted out their Bolshoi ballet, while the US focused on Broadway plays, jazz music and freedom in literature. One of the most intriguing events in the cultural Cold War was the western publication of Boris Pasternak's Dr. Zhivago, which is critical of the Soviet state. 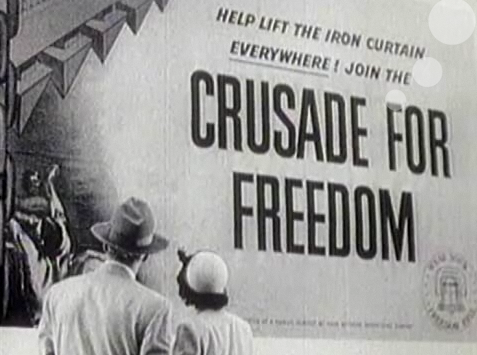 With investigative journalism being part of her DNA, Nell can't help but wonder if Charlie's murder was really part of a random mugging, or if he was targeted for some other reason. And, as she goes through his papers, she begins to wonder more about whether Charlie had a secret life; whether his role in the cultural Cold War was more of a soldier than a volunteer.

Ellen Feldman so well depicts the numbness of Nell's suddenly becoming a young widow with a small child, followed by the flood of anger, confusion and other swirling emotions. Then, as Nell delves into Charlie's secrets, "I could not stop reliving my life backward. Not backward in time, but backward in perceptions and emotions." This is a perceptive examination of Nell's journey.

More than one woman's story, though, this is also a reflective and engrossing visit to one side of the Cold War that should be of particular interest to those who also came of age in that period. Not Nikita Khrushchev pounding his shoe on the table at the UN, or the duck-and-cover drills, but the hoopla over Boris Pasternak's Dr. Zhivago, battles between eastern and western judges at the Olympics and other international sports competitions, and troupes of actors, dancers, writers and artists traipsing through world capitals, all flags a-flutter.

The Unwitting is an emotionally and intellectually engaging read that feelingly and subtly examines the complexities of love, loyalty and morality. And it made me want to read Frances Stonor Saunders's The Cultural Cold War: The CIA and the World of Arts and Letters (first published in 2000; second edition from New Press, 2013) and Petra Couvée's The Zhivago Affair: The Kremlin, the CIA, and the Battle Over a Forbidden Book (Pantheon, June 17, 2014).

Note: I received a free review copy of The Unwitting. Versions of this review may appear on Amazon, Goodreads, BookLikes and other reviewing sites under my usernames there.
Posted by Sister Mary Murderous at 11:39 AM