You probably remember the fairy tale about Goldilocks and the Three Bears. I recently read in Wikipedia about the original 1837 tale by British poet Robert Southey:

"In Southey's tale, three anthropomorphic male bears – 'a Little, Small, Wee Bear, a Middle-sized Bear, and a Great, Huge Bear' – live together in a house in the woods. Southey describes them as very good-natured, trusting, harmless, tidy, and hospitable. Each bear has his own porridge bowl, chair, and bed. One day they take a walk in the woods while their porridge cools. An old woman (who is described at various points in the story as impudent, bad, foul-mouthed, ugly, dirty and a vagrant deserving of a stint in the House of Correction) discovers the bears' dwelling. She looks through a window, peeps through the keyhole, and lifts the latch. Assured that no one is home, she walks in. The old woman eats the Wee Bear's porridge, then settles into his chair and breaks it. Prowling about, she finds the bear's beds and falls asleep in Wee Bear's bed. The climax of the tale is reached when the bears return. Wee Bear finds the old woman in his bed and cries, 'Somebody has been lying in my bed, – and here she is!' The old woman starts up, jumps from the window, and runs away never to be seen again."


The version of the fairy tale I'm familiar with, and I'd bet you are, too, features a little girl instead of an old woman who visits the house. The little girl, in addition to being very curious, is very fussy and she tests three bowls of porridge, three chairs and three beds before deciding in each case that the Wee Bear's is just right. 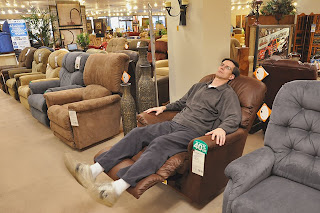 The Goldilocks Principle (the condition of being just right) applies to my reading, too. This can create some real problems, trying to find a book that feels like the perfect fit for my mood. A few weeks ago, Georgette suggested using fortune cookie fortunes to find that book and I enjoyed trying that method. Usually, however, I employ the same method Goldilocks used, trying some on for size until I find the right one. Given one situation, here is a book that was just right for me. I had a draining day at work. After dinner, my two boys backtalked when I told them it was time for homework. I wanted to respond with a little impudence of my own but instead I picked up a book by George V. Higgins, Penance for Jerry Kennedy, and vicariously enjoyed all the adult sass.

Higgins was an assistant U. S. Attorney for Massachusetts and dealt with organized crime. He later worked as a criminal defense lawyer, defending clients such as Eldridge Cleaver and G. Gordon Liddy. As a writer, he is most famous for his books about Boston's lowlife, including The Friends of Eddie Coyle (which I'll tell you about on Saturday), The Digger's Game and Cogan's Trade.

He also wrote a series about a nice guy named Jerry Kennedy, whose criminal-defense practice after 20 years is repetitive. Kennedy says, "Half of what it repeats, from my clients' mouths and mine, can be reduced to those two short words: 'Big money, Mister Kennedy, he promised me big money.' The other half, or roughly that, is people who have created their own troubles with some kind of intoxicants, either because they did not get their big money or because they in fact did.... For me, in my middle age, child molesters and wife-beaters are a welcome change, people who did evil things because of warped passions that did not involve money. And, of course, I meet them all because I'm out for their money."

In the second book of the series, Penance for Jerry Kennedy, Kennedy's client, personal accountant and good friend Lou Schwartz, has been convicted for his income-tax preparation for mobster Nunzio Dinapola. Schwartz refused to cooperate with the prosecutor's scheme to nail Dinapola, so Schwartz was prosecuted instead. Kennedy admits he is not at his best when he puts on a show that he wouldn't believe were he the one watching it and therefore he couldn't convince the jury that Schwartz didn't lie when he signed Dinapola's 1040 form claiming that as the tax preparer, he believed the numbers and sources of income to be true and accurate. (As Schwartz tells Kennedy, "You think Nunzio is going to tell me to put down the barbut games? You think I would ask him where he got the money? You think I would like him to have me killed? Of course it is lies.") Schwartz is going to jail for two years and Kennedy is miserable about it. To add to his unhappiness, the IRS is now turning its attention to him because he's Schwartz's attorney; his wife Mack is arguing with him about money; his secretary is procrastinating; and his mentor, big-shot lawyer Frank McDonald, isn't eager to help him. Kennedy, in his search for a new accountant, falls into the hands of Bertram Magazu, which may not be a good thing.

Higgins's ear for dialogue, ability to create an entertaining courtroom setting and skill at characterization are remarkable. He can define characters in just a line—"David is the sort of guy that you jab every chance that you get, just because he deserves so many more shots than he'll ever get in this world that God would punish you for wasting one." His plots are sometimes filtered through a torrential digression of dialogue and the narrator's internal musings but then one doesn't read Higgins's books for plot alone. If you appreciate a quick-witted, insightful, somewhat world-weary but Mr. Nice Guy narrator, these Jerry Kennedy books are for you. They're not for readers who can't tolerate X-rated talk. For readers who can, they will make you laugh out loud. You don't have to be a legal mysteries fan to enjoy them. I particularly recommend them to people who like Michael Connelly's sleazy lawyer Mickey Haller. Start with the entertaining first book in the series, Kennedy for the Defense.

I'd love to hear about an experience that prompted your attempt to nail down that just-right book. What did you end up reading?
Posted by Della Streetwise at 9:15 AM