We've all had bad days at work. But you know what? It could be worse. For some thriller protagonists, a day on the job can be a threat to life and limb.

In Josh Bazell's Beat the Reaper, Peter Brown is an intern at Manhattan's crummiest hospital. Bazell was an intern himself when he wrote the book and it shows. It's delirious with sleep deprivation and filled with a clinically detailed violence I've never seen anywhere else.  Peter's lousy day begins even before he gets to the hospital:


"So I'm on my way to work and I stop to watch a pigeon fight a rat in the snow, and some fuckhead tries to mug me! Naturally there's a gun. He comes up behind me and sticks it into the base of my skull. It's cold and it actually feels sort of good, in an acupressure kind of way.

The rat and the pigeon run away. Chickenshits.

I turn around, which rolls the gun off my skull and leaves my raised right hand above the fuckhead's arm. I wrap his elbow and jerk upwards, causing the ligaments to pop like champagne corks.

Let's take a moment to smell the rose known as the elbow."

Then follows a paragraph explaining the anatomy of the elbow, along with a footnote (believe it!) about the anatomy of the lower leg and the handy information that you can actually take out most of your fibula and still be able to walk "as long as you don't fuck up the ankle or the knee."

But Peter's bad day really begins to hit its stride when he enters the room of a new patient with an almost certainly fatal case of stomach cancer. The new patient, Nick LoBrutto, and Peter recognize each other. Once upon a time, Peter Brown was Pietro Brnwa of West Orange, New Jersey. After his Holocaust-survivor grandparents are brutally murdered, Peter is on a mission to find out who killed them. He befriends a schoolmate whose father is in the mob so that he can make a deal with the father to get the information about the killers' identities. Nothing is for free in that world so, after he exacts his revenge, he's not surprised that the father recruits him to be a hit man.

But now, years later, Pietro is Peter and his old life is far behind him. Until LoBrutto shows up and makes him an offer he can't refuse: keep me alive or I tell your old friends about you. The novel plays out over the course of Peter's shift, which becomes increasingly er, fraught shall we say, what with hitmen, accidental hypodermic sticks, and an egomaniacal surgeon (redundant, I know) who is determined to amputate the leg of a young woman although Peter knows, just knows, it isn't necessary.

As if all that isn't enough, author Bazell throws in flashbacks to Peter's Pietro Brnwa life, and segues into the history of the Italian and Russian mobsters in the tri-state area, well-deserved critiques of the US medical system, and information about Auschwitz today. Some critics thought that all this, along with the many medical footnotes, was just too much; a rookie author mistake of self-indulgent excess. But all the insanity, angry disquisitions and pulp style make for a heck of a carnival ride and as a bonus you get a heartfelt novel with a protagonist you can care about, even if he's also a fuckhead. It's exciting to know that a followup novel is due to be published early in 2012.

If you've ever worked at a downtown office building, you know the drill. You join the human current pouring off the subway and down the sidewalk, veering into the corner coffee shop for an overpriced café latté so you can avoid the liquid pencil shavings at work. Clutching your cup (Caution: contents are hot), you head into the lobby and over to the elevator banks. On the elevator, you stare at the wall panel, careful to avoid eye contact. The floor buttons light up, higher and higher, until—bing—you reach your floor. As the doors slide open, you step out onto the low-pile neutral carpeting and enter that hermetically sealed world of ringing phones, cubicles, and offices designed to subtly convey exact hierarchies. You make your way to your designated place and begin serving your day's term.

Dave Elliot, protagonist of Joseph R. Garber's Vertical Run, is one of those guys they used to call Masters of the Universe. Former military and now an EVP in Manhattan, with an 800-square-foot office. Dave likes to keep in shape by getting up early, going for a run and then showering in his en suite office bathroom, dressing in one of the many suits hanging in his office's walk-in closet.

This day seems like any other. Dave has just finished knotting his tie and is sipping his coffee when his colleague Bernie Levy steps in. What's different about Bernie this morning? A couple of things. His eyes are red, and he looks exhausted and shaky. Oh, and he has a nickel-plated pistol in his hand, pointed straight at Dave's chest. Thank goodness for hot coffee and quick reflexes, which allow Dave to splash Bernie in the face, jump forward and grab the gun, while kneeing Bernie in the groin and then knocking him out with the pistol grip. 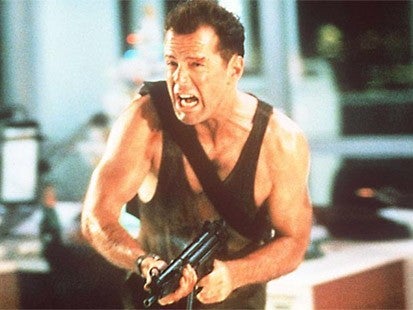 I don't know what this is about, Dave thinks, but it's probably a good idea to bug out of here. Uh oh, two linebacker-ish guys in the hallway. Dave didn't get to the top of the corporate world by being a dummy. He almost—almost—outsmarts these guys. The almost means he escapes in a hail of bullets, not in a quiet stroll and some elevator Muzak. Makes it to the lobby, where he spots more gunmen. But that's not what tells him that his day's suck-o-meter level is still rising. It's the fact that his wife, Helen, is standing with those hard-eyed men and, when she spots him, she points and shouts: "That's him! There! There he is! Get him!"

All this happens in the first 13 pages of Vertical Run. From there on out it's an adrenaline-filled three days as Dave Elliot tries to find out what made him the target of just about everybody he lays eyes on. Vertical Run is one of the most thrilling thrillers I've ever read, with a plot so outlandish and cartoonishly violent you have to laugh even while your heart is pounding. The real mystery is why it never made it to film. I can just see Bruce Willis playing Dave Elliot.

In James Grady's Six Days of the Condor, protagonist Ronald Malcolm is much luckier than Peter Brown and Dave Elliot. Malcolm makes it all the way to lunch before his day goes completely to hell. Malcolm works for the CIA, in an undercover office in Washington, DC, where he spends his days analyzing the plots of crime and espionage fiction. (Hey, nobody ever told me that was a career option.) One rainy day, Malcolm effectively draws the short straw and goes out to get lunch for everybody. He returns to find all his colleagues shot dead.

When Malcolm calls the CIA panic line, giving his Condor code name, that only leads to an attempt on Malcolm's life. Now on the run, Malcolm knows he can trust nobody in his quest to solve his own crime story. Six Days of the Condor did make it to film. Hollywood's well-known impatience turned it into Three Days of the Condor. Washington turned into New York City and Ronald Malcolm turned into Joe Turner, played by Robert Redford. It was the 1970s, one of the dark nights of this nation's soul, and the reasons for the hit at the office turned out to be far darker, more cynical and paranoid in the movie than in the book. No matter how bad their workdays were, Peter Brown, Dave Elliot and Ronald Malcolm were protagonists, meaning they were still alive at the end of the day. Work can be a more literal killer when you're not the protagonist.

People who work in creative fields have a talent for death on the job. Advertising copywriter Victor Dean tumbles down a flight of stairs in Dorothy L. Sayers's Murder Must Advertise. Australian opera singer Gaylene Ffrench is electrocuted in Robert Barnard's Death On the High C's. In Kerry Greenwood's Ruddy Gore, a revival of Gilbert & Sullivan's Ruddigore turns His Majesty's Theatre in Melbourne into a kill zone, with two actors poisoned and another found dead in her dressing room. Another dressing-room death befalls the despised opera singer Edwin Shorthouse in Edmund Crispin's Swan Song. We could spend all day talking about murder on the job in the theater and other artistic venues.

But to return to more prosaic workplaces, how about the accountant strangled by the cord of his adding machine during an audit in Emma Lathen's Accounting for Murder? And let's take one of my old stomping grounds: the law firm. In Susan Wolfe's award-winning The Last Billable Hour, a name partner of a flashy Silicon Valley law firm in the go-go 1980s is stabbed to death at the office. Even that seems better than the fate of Mr. Smallbone, client of the law firm of Horniman, Birley & Craine in Michael Gilbert's Smallbone Deceased. Mr. Smallbone is found, weeks dead, in a sealed deed box in the office of the firm's recently deceased name partner Abel Horniman. Unexplained is whether Smallbone was an unusually diminutive man, as his name would suggest, or the deed box was particularly large.

Thinking all this over, when you get home from work tonight, won't you just be grateful you're still upright and nobody tried to stab you, gun you down, poison or electrocute you or find some even more colorful way of finishing you off?

Why don't we all take a deep breath and say: Thank God it's Friday!
Posted by Sister Mary Murderous at 6:00 AM