Between the covers: books about books and bookstores

The Bookshop has a thousand books,
All colors, hues, and tinges,
And every cover is a door
That turns on magic hinges.
–––Nancy Byrd Turner


As brick-and-mortar bookstores disappear all across the country, there is a sort of nostalgic yearning for them. I know that I'm always consumed with jealousy when Georgette talks about her latest visit to Powell's City of Books in Portland, Oregon.

Just recently, several books about bookstores were published (or are about to be published). These might make good choices for bookstore lovers or an upcoming book club discussion.

In Gabrielle Zevin's The Storied Life of A. J. Fikry (Algonquin Books, April 1, 2014), A. J. Fikry's Island Books is teetering on the edge of complete failure. So is Fikry, whose wife was killed in a car accident and who is now an embittered man. Not that he was necessarily all stardust and unicorns before; the man had and has very strong feelings about books and refuses to stock on the basis of what will sell.

Island Books' bookshelves reflect Fikry's tastes, and any publishers' reps and customers who think that should change get short shrift from Fikry. Fikry's low point looks like it has arrived when he, nursing a wicked hangover, discovers an extremely valuable book has been stolen from the store––and that a toddler named Maya has been abandoned there.

This is a book written for book-drunk readers, with loads of insider's comments about literature and each chapter headed by a brief review of a book or story, ostensibly written by Fikry. Mystery fans will be especially delighted to see that Fikry's first review is of that classic Roald Dahl murder mystery story, "Lamb to the Slaughter." 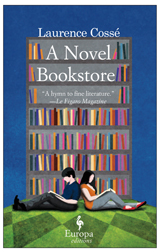 In Laurence Cossé's A Novel Bookstore (Europa Editions, 2010; translated from the French by Alison Anderson), Paris is home to The Good Novel, an unusual shop and, like Island Books, one with opinionated ownership. Ivan Georg and Francesca Aldo-Valbelli stock only books that have been deemed masterpieces of fiction by a secret committee of eight authors.

Who hasn't dreamed of creating the ideal bookstore? The notion of stocking only the best novels seems as good as any, and the shop is a roaring success at the outset. But there is a surprising backlash, with accusations that the shop's concept is elitist and totalitarian, and the negative reactions escalate to demonstrations and lawsuits.

Worse yet, there are attempts to murder three members of the secret committee. Who is going after the committee members? Disgruntled authors or publishers whose books are not stocked? Rival bookshop owners? Anti-elitists?

A little bit mystery, a little bit love story, and a lot of what Publishers Weekly calls "sly commentary about gatekeeping in the literary world," this is, above all, a bouquet to bibliophiles. In Tom Rachman's The Rise & Fall of Great Powers (The Dial Press, June 10, 2014), Tooly Zylberberg is a rootless young woman who, at age 32, roots herself in a Welsh village. Not so much the village, actually, as at World's End, the barely-scraping-by used bookshop she buys and whose attic she converts into living quarters for herself and her minimal belongings. She is content to pass her days sitting on the floor reading books, chatting with her ineffectual shop assistant, Fogg, and taking long solitary walks.

That's our introduction to Tooly in 2011. We are quickly transported back to 1999, with Tooly living hand-to-mouth in New York City, with a project of walking every street in the city and, along the way, conning her way into people's apartments, just to see how they live. Then we go back further to 1988 to see 10-year-old Tooly moving from Australia to Bangkok. We bounce among these different time periods throughout the book.

In each slice of Tooly's life, she is generally on the periphery, which is maybe not surprising considering how variable her life is. She's cared for (though that makes it sound more stable and organized than it really is) by various people, including the flighty Sarah, the charming conman Venn, the uptight Paul and the bibliophile and self-proclaimed slob, Humphrey. In 2011, when Tooly gets a call about Humphrey from her old 1999 boyfriend, Duncan, she decides to return to New York and get answers about all these characters and what her proper place is in their universes––and theirs in hers.

The story is not primarily focused on books and bookstores, though they are woven throughout. Instead, this is a character-rich Dickensian story of Tooly's quest and her reassessment of what the people in her life mean and have meant to her. Rachman includes a note about bookstores he loves and yes, Georgette, Powell's is among them. Robin Sloan's Mr. Penumbra's 24-Hour Bookstore (Farrar, Straus and Giroux, 2012) somehow manages to reconcile a love for "dead tree books" and bookstores with excitement about modern technology, especially everything Google-related. It's a fast-paced mystery/thriller about a secret society's attempts to translate an old encoded book and our techno-maven protagonist Clay Jannon's bringing his cutting-edge skillz (as the kids say) to the task.

Almost exactly a year ago, Charlie Lovett's The Bookman's Tale: A Novel of Obsession (Viking Adult, 2013) kept me up into the wee small hours––and those who know me are well aware of just how rare that is. Recently widowed young antiquarian bookseller, Peter Byerly, is driven by his grief to leave his home in North Carolina for the cottage he and his wife had just finished sprucing up in Oxfordshire, England. There, Peter slowly returns to his bookseller/hunter life.

Two accidental finds electrify Peter and lead him on quests that make for a thrilling adventure story for readers fascinated by old books and their travels through time and the lives of their owners. My full review of The Bookman's Tale is here.

There are dozens of other wonderful books about bookstores and the love of books, like Helene Hanff's 84 Charing Cross Road, Carlos Ruiz Záfon's The Shadow of the Wind and Diane Setterfield's The Thirteenth Tale, but these newer titles can be added to their shelves––after they've been read, of course.

Note: Thanks to The Dial Press and Amazon's Vine Program for providing an advance reviewing copy of Rachman's The Rise & Fall of Great Powers. Portions of this post may appear in book reviews on Amazon, goodreads and other sites under my user names there.
Posted by Sister Mary Murderous at 11:28 AM